They do not have time for Congress: Azad

Azad also talked about Prime Minister Narendra Modi's farewell speech for him in the Rajya Sabha and said he thought the PM was "crude" but still showed he has "humanity". 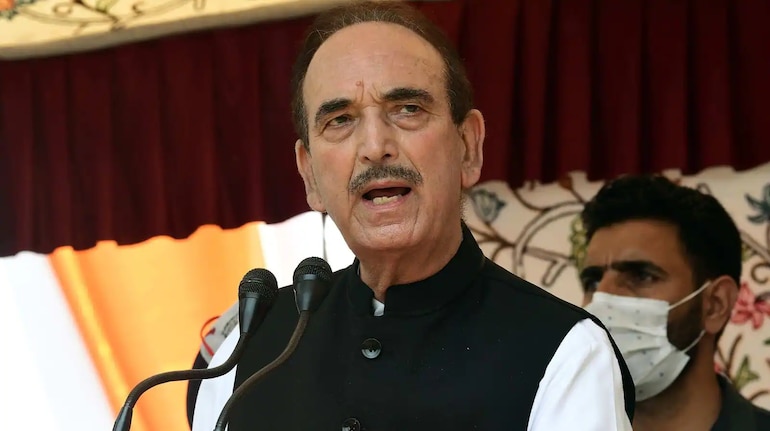 Azad also talked about Prime Minister Narendra Modi’s farewell speech for him in the Rajya Sabha and said he thought the PM was “crude” but still showed he has “humanity”.

Talking to the media here, the veteran Congress leader alleged that he was sidelined from the party after a letter was written by the ‘G 23’ group last year and was taken out of the campaign committee even as he had been a ‘star campaigner’ for the party for decades.

“The family members forced me to leave the house… When people start feeling that you should not be there, a wise person’s job is to leave the place,” Azad said.

Referring to the much discussed speech of Modi in the Rajya Sabha on Azad’s retirement, he remembered an incident when some Gujarati tourists had died in a grenade attack in Jammu and Kashmir. Azad said he was crying when he got a call from Modi, who was Gujarat Chief Minister then.

“You are educated people, who must have seen a speech of Modi Sahab. If anyone reads the content of Modi’s speech, he talked about an incident. I used to think he is very crude, he is not married, does not have a wife or children, so he is crude… but at least he has humanity,” said Azad.

“When the Gujarat Chief Minister’s call came, I was crying. When my office people gave me the phone, I said I could not talk, I was crying… When I went to send away the bodies, I started crying again. He (Modi) remembered that incident, what is wrong with that?” said Azad.

The attack happened on May 25, 2006 in Srinagar in which four tourists were killed and six were injured.

As the Congress attacked Azad for being acting on behest of the Bharatiya Janata Party (BJP), Azad said: “Modi is an excuse, they do not like us since we wrote that letter of G23. They felt they were above the party.

“Even if Congress gets zero it will not make any difference. We have been raising issues for a long time, there were no committees… There were several meetings held, they did not listen to even a single suggestion.”

He also questioned who was fulfilling BJP’s dream of ‘Congress free India’ by damaging the Congress.

Azad said he has respect for Sonia Gandhi and also for Rahul Gandhi as he is a member of the family of Indira Gandhi and Rajiv Gandhi.

“I have a lot of respect for Sonia Gandhiji. The problem is with the working style of the present regime.”

“Personal respect for Rahul Gandhi is as much as it should be for the family of Indira Gandhi and Rajiv Gandhi. We tried to back him, but he did not stick to anything. It has never happened before that the working committee is being presided over from outside India.

“Our ideology cannot be taken out of our heart. But in a party where leadership is not ready to listen to our recommendation,” he said.

In an apparent retort to Congress General Secretary Communication Jairam Ramesh’s tweet where he said Azad’s DNA had been ‘Modi-fied’, the former Congress leader said, “The person who is talking about my DNA, what is his DNA? He is here only to plant stories against me? He used to sit in Rajya Sabha and send slips to BJP… He is talking about our DNA…”

“Outsiders who do not know anything about Congress, who have gotten the post by flattery and for tweeting,” he said.

Azad, a veteran leader, former union minister and former chief minister of Jammu and Kashmir, quit the Congress on Friday accusing Rahul Gandhi of reducing to “ruins” what was once a “national movement” that won the country independence.