The Twitter storm was the result of comments made by Abdullah and Mufti over the weekend slamming his film “The Kashmir Files” that they said has incited violence in the Valley. 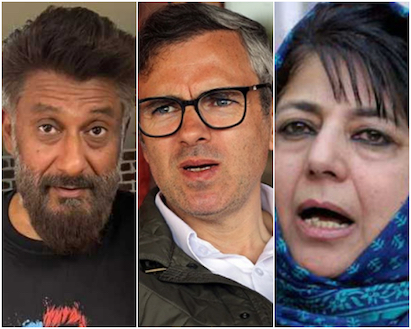 “The way forward is not denial but acknowledging the crime, commit oneself to never repeat it and maintain an inner vigil. – Nelson Mandela cc: Farooq Abdullah, Mehbooba Mufti and other Terror-supporters,” Agnihotri tweeted after two days of back and forth between the three.

The Twitter storm was the result of comments made by Abdullah and Mufti over the weekend slamming his film “The Kashmir Files” that they said has incited violence in the Valley.

PDP chief Mehbooba Mufti recently attacked the film. Holding the film’s narrative of accusations as false, she said during the peak of unrest in Kashmir, the minority Kashmiri Pandits were not attacked.

“They are creating Hindu-Muslim issues to distract from real topics,” Mufti said. She also trained guns at the BJP-led government at the Centre over the Gyanvapi mosque row in Varanasi and said that “they are after all our mosques”.

“They (Centre) are creating Hindu-Muslim issues to distract from real topics and are after Gyanvapi mosque now. They are after all our mosques. Our God is wherever we worship; give us a list of all mosques you are eyeing,” the PDP chief said.

NC’s Farooq Abdullah, who met Lt Gov Manoj Sinha following Bhat’s killing said on Sunday “We met J&K Lieutenant Governor Manoj Sinha on Sunday to raise the issue of the deteriorating law and order situation in Jammu and Kashmir. At the meeting, I told him that the film ‘The Kashmir Files’ has created hatred in the country. Is it possible that a Muslim killed a Hindu, put his blood in rice and asked his wife to eat it? Such things [films] should be stopped. Media that spreads hatred should be stopped.”.

Calling the film “baseless”, he demanded a ban on it accusing it of inciting communal tensions. Taking to his Twitter handle, Agnihotri slammed Abdullah and said “Wow Disco CM wow! When terrorists were given shelter in your party’s HQ, you were taking Bollywood heroines on a joy ride. No wonder, you forgot in a Disco that it was your father and yourself who were the architects of terrorism and Hindu hate in the valley.”

Not letting up he further tweeted “Yes, you speak correctly Mr. Farooq Abdullah. If there was no # The Kashmir Files, then there would have no Hindu genocide. It was your people who saw my film and learnt the slogans of “Raliv, Galiv or Chaliv”, otherwise those innocent souls did not even know how to speak. Even the flag of Pakistan was put by this film.”