If BJP blames the Congress government for Rs. 8807.82 crore, then should the next government in 2022 also blame the present BJP government for its financial liabilities in 2021-22, he asked. 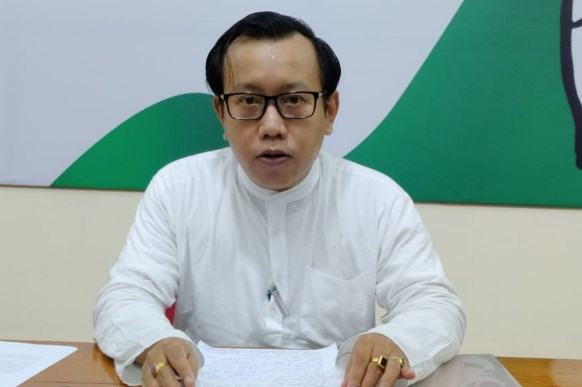 Imphal: The BJP government in Manipur should not confuse the people by blaming the previous Congress governments as the cause of financial burden and all ills, Congress Spokesperson Ningombam Bupenda Meitei Tuesday said.

Addressing a virtual media conference, he said the BJP alleged that it started with a burden of Rs 8707 crore.

He said Congress-led coalition governments, which governed from 2002 to 2017, under Okram Ibobi Singh, was committed to maintain fiscal discipline and management for the better economy of Manipur.

In August 2005, the Congress government had enacted the Manipur FRBM (Fiscal Responsibility and Budget Management) Act to ensure prudence in fiscal management and fiscal stability of the state, he said. The States’ enactment/amendment of the FRBM Act, incorporating the targets prescribed by the Finance Commission, was a pre-condition for release of all State-specific grant and debt relief measures.

He said from where the BJP gave the figure of Rs. 8707 crore. He said BJP neither gives the correct figures nor quotes a reference.

BJP has been justifying its relentless increase in petrol and diesel prices in Manipur without even having an iota of meetings on reducing a single rupee from state’s VAT in a litre of petrol or diesel during a covid pandemic by giving the figure of Rs 8707 crore, he said

If BJP blames the Congress government for Rs. 8807.82 crore, then should the next government in 2022 also blame the present BJP government for its financial liabilities in 2021-22, he asked.

Therefore, the arguments raised by the BJP on financial liabilities are against the principle of continuum of government. The BJP must learn and appreciate the fiscal discipline of the previous Congress governments, he said.

The BJP also portrays as if the Congress government did have borrowings that had created a financial burden on its subsequent government as of today. He reminded that as per the CAG Report of 2020, BJP government borrowed Rs. 2,077.73 crore in 2017-18 and Rs.4654.93 crore in 2018-19.

So, in the entire 5 financial years the total borrowing by the BJP government would be Rs. 16,831.65 crore, he said. How can such a heavy financial burden on the people of Manipur be a characteristic of being a pro-people and people’s friendly government, he asked.

He said if Congress government did not bring the central status to RIMS and establish JNIMS as a state owned medical college, then the fight against Covid pandemic would have been further worsened. He reminded that the BJP government has not built any new government hospital.

He asked how many crores of rupees have been spent by the BJP government in procuring ICU beds equipped with ventilators since 2017.

He said as Congress governments always worked to maintain fiscal discipline under FRBM, recruitment took place as a result of a long ban on employment, long-awaited backlog vacancies and cumulative vacancies, which were not being filled after the retirement of many state government employees.

Employment was necessitated to provide manpower to prevent the governance from the collapse of state government departments and machinery. The employment was not due to the creation of new posts but to fill the vacant posts, as a part of a minimal number of employees with an objective of not violating fiscal discipline, he said.