The editorial pointed out that inflation in Sri Lanka has surged to more than 70 percent and food prices have soared by over 84.6 percent, compared to a year ago. 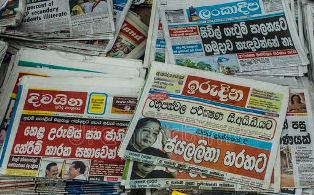 Colombo: A leading Sri Lankan newspaper on Monday came out strongly against a slew of taxes announced by the government, saying these will force people to commit suicide.

“Having stolen huge amounts of public wealth and bankrupted the country, the perpetrators of economic crimes, in positions of power, are now all out to recover losses at the expense of the people, who have had to pay for others’ sins by way of massive increases in tariffs and taxes,” The Island said in an editorial.

“The proposed tax increases, if implemented, will drive many people to suicide,” it warned. Taxes, it said, must be paid, but they must be reasonable.

“The ill-conceived tax increases that have incensed the public beyond measure make one wonder what would happen if the leaders … were to run a dairy farm. They would slaughter all cows instead of milking them!

“In handling vital affairs of the state such as taxation, they have followed a zigzag course like drunkards over the decades; they have meddled with taxation and politicized it in such a way that state revenue has dropped drastically and the current administration has chosen to squeeze the taxpayers dry.

“The heartless tax hikes will affect everyone except politicians who are above the taxman and do not have to declare their assets. Many medium and small-scale businesses are bound to go belly up if the proposed tax increases are implemented.

The editorial pointed out that inflation in Sri Lanka has surged to more than 70 percent and food prices have soared by over 84.6 percent, compared to a year ago.

“The government is exploiting the public while doing nothing to curtail waste and corruption. It continues to spend huge amounts of public funds to maintain an unproductive public sector, which is inefficient, corrupt, and overstaffed,” it said.

“Besides, people have to maintain as many as 8,680 elected representatives — 225 MPs, 455 Provincial Councillors, and 8,000 local government members.”

It said the number of MPs can be slashed, and the country does not need more than 30 percent of the local government members.