Sisodia at CBI for questioning in the excise policy case

The AAP leader accused the Centre of preparing to arrest him by making a completely fake case. 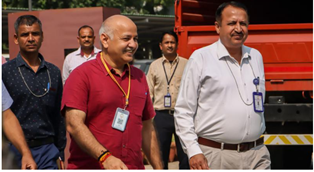 Sisodia, who was summoned to appear before the probe agency for questioning, first visited Rajghat with his party workers and then proceeded toward CBI headquarters.

The AAP leader accused the Centre of preparing to arrest him by making a completely fake case.

He posted a series of tweets and wrote: “They are preparing to arrest me by making a completely fake case against me. I was to go to Gujarat for an election campaign in the coming days. These people are losing Gujarat badly. Their purpose is to stop me from going to the Gujarat election campaign.”

“When I went to Gujarat, I told the people of Gujarat that we will build wonderful schools like Delhi for your children in Gujarat too. People are very happy. But these people do not want good schools to be built in Gujarat also, people of Gujarat should also study and progress,” he added.

The Gujarat election campaign will not stop if I will be put in jail. Every child of Gujarat is now campaigning for good schools, hospitals, jobs, and electricity. The coming elections in Gujarat will be a movement,” he wrote.

Reacting to CBI’s summon to his Deputy, Delhi Chief Minister Arvind Kejriwal alleged that these people will keep Manish in jail till the Gujarat election results are out.

Kejriwal tweeted: “Gujarat results will be out on December 8. These people will keep Manish in jail till then. So that he does not campaign in Gujarat elections.”