Sky is the limit for him: Rohit heaps praise on Surya

The late-blooming Yadav has looked comfortable on the biggest of stages so quickly that he has become one of India's key players little more than 18 months after making his international debut. 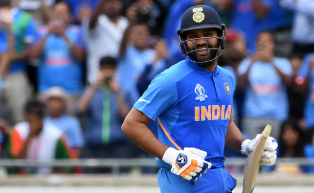 Adelaide: India captain Rohit Sharma lavishes praise on batting sensation Suryakumar Yadav, who has already had a year to remember, and said that the “skies is a limit for him”.

The late-blooming Yadav has looked comfortable on the biggest of stages so quickly that he has become one of India’s key players little more than 18 months after making his international debut.

Surya marked his debut in a T20I against England in March 2021 – the same opponents that India will face in an ICC Men’s T20 World Cup semi-final on Thursday.

The 32-year-old batter has since surged to No.1 in the ICC Men’s T20I batting rankings while becoming just the second batter to reach 1000 runs in the format in a calendar year.

Yadav ended the Super 12 stage with 225 runs at a strike rate of 193.96 – a soaring rate boosted by frequently attacking bowlers from the start of each of his five innings at the T20 World Cup.

“He likes to bat in a similar fashion whether we were 10/2, or 100/2,” ICC quoted Rohit as saying in a pre-match oress conference. “He likes to go out and express himself, and that’s probably the reason he was in the team in the last (T20) World Cup.

“Although we didn’t have a great World Cup, looking at what he’s done in the entire year from that World Cup onwards, as we say, the sky’s the limit for him.

“He’s shown great maturity, as well, has taken pressure from a lot of the guys the way he plays, and it rubs off on the others as well, when they bat around him.

“He understands he likes playing on the big ground. He hates playing on small grounds. He doesn’t like the smaller boundaries, smaller grounds. He can’t see the gaps. I believe that he likes to see big gaps, and that’s where his strength is.”

Speaking about his forearm, Rohit said that his hand has “a little bruising, but it’s absolutely fine now” after copping a knock while batting in the nets at the SCG on Tuesday and needing close attention before returning to face more balls.

But the India skipper was tight-lipped on whether Rishabh Pant might hold his spot in the playing XI for the semifinal after the left-hander replaced veteran Dinesh Karthik for their final Super 12 match.

Pant made three runs against Zimbabwe, while fellow keeper-batter Karthik has averaged 4.67 runs in three innings at the T20 World Cup.

“Rishabh was the only guy who didn’t get to play on this tour at all except the two games that we played in Perth. That was an unofficial practice game,” Rohit said.

“We wanted to give him some time and have some options as well, if we want to make changes in the semis or the finals.

“It was a little tactical as well, considering we were not knowing which team we would be playing in the semis before that Zimbabwe game, so we wanted to just give a left-hander an opportunity to counter some of the spinners who bowled in the middle for New Zealand and England.

“What is going to happen tomorrow, I won’t be able to tell you right now, but both of the keepers will be in play for sure.”