PM urges soldiers to back BJP

He said this while addressing an election rally at Sujanpur Tira in Hamirpur district. It will be perhaps the last rally of the Prime Minister in the state before the state goes to polls on November 12. 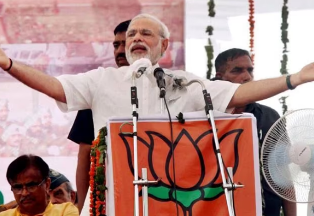 Hamirpur (HP): Prime Minister Narendra Modi on Wednesday urged soldiers from Himachal Pradesh to have faith in the BJP for their well-being and warned that if they voted for the Congress, they will lose whatever the BJP had given to them since 2014.

He said this while addressing an election rally at Sujanpur Tira in Hamirpur district. It will be perhaps the last rally of the Prime Minister in the state before the state goes to polls on November 12.

“I’m your Pradhan sevak and in that capacity I have come to you to seek votes for my party and I’m hopeful that people will vote en-masse for the BJP and its candidates,” he said.

Modi also introduced the candidates to the people and sought votes for them in the rally.

While paying rich tributes to the martyrs of the nation, he said that he was proud to have come to a place that was the hub of the activists of serving soldiers, ex-servicemen and their families.

He said that India was alive due to the sacrifices made by soldiers, especially from Himachal Pradesh. He said that was the reason that the party had given the ticket to Captain Ranjit Singh (Retd.) from Sujanpur after senior leader Prem Kumar Dhumal decided not to contest this time.

He said the BJP government gave full powers to the Indian forces to fight the Kargil war because of which the war was won.

The Prime Minister said that the double engine government did many things for their daughters.

He warned the people that if Congressmen were allowed to rule the state, nothing will happen, as is evident from their past.

Modi said the Congress was on its way out and if it was allowed to stay it would doom the nation and country would be in the grip of foreign powers.

He said the Congress does nothing in Parliament and always preferred to stage walkouts and to harm the cause of the people.

National Highway projects worth 10 thousand crores were going on in Himachal Pradesh and would become a reality in four years, he said.