After filing his nomination, Sibal clarified that he filed the nomination as an independent candidate. He also announced that he had quit the Congress on May 16. 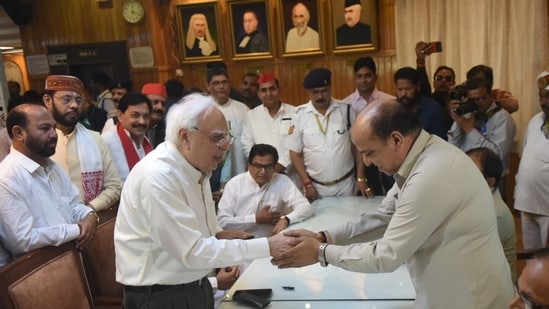 Lucknow: Eminent lawyer and former Union Minister Kapil Sibal on Wednesday filed his nomination for the Rajya Sabha with the support of Samajwadi Party, announced that he has quit the Congress, and clarified that he has not joined the SP.

After filing his nomination, Sibal clarified that he filed the nomination as an independent candidate. He also announced that he had quit the Congress on May 16.

Sibal also said he had made a public statement that he will not join any party, and hence he has not joined the SP.

“I told Akhilesh ji that I want to go to Rajya Sabha but as an Independent candidate… There are no conditions,” he said.

“I felt it was time to be in the House as an Independent candidate. I have no bad feelings or complaints with the Congress. Our relations are good,” he said.

“We are all constrained by the fact that we are members of political parties and we have to therefore abide by the discipline of the party. It is important to be an independent voice,” he said.

He also refused to comment on the Congress and said, “I could have raised questions on Congress as long as I was in Congress… I don’t think it will be appropriate to comment”.

“If you have a relationship with someone for 30-40 years, when the relationship breaks it is not easy,” he said.

Sibal, a key leader from G-23, the reference used for the group of senior leaders in Congress who have been demanding organisation reforms and polls, had been criticized by many after he questioned who was running the Congress as the party did not have an elected president.

Some Congress workers had also attacked his house in Delhi after his statement.

The former HRD minister in UPA government also kept away from the recent Chintan Shivir of the party in Udaipur, Rajasthan, and had sent his resignation to the party on May 16, a day after the meet concluded.

Sibal, an eminent lawyer, had recently represented jailed SP leader Azam Khan in Supreme Court and helped him secure interim bail. He had earlier also helped the SP retain the party’s bicycle symbol in 2017 when a family feud led to split in the party.

Since the Udaipur Chintan Shivir of the party, Sibal is the third prominent Congress leader who has quit. Before him, former Punjab Congress chief of the party Sunil Jakhar resigned as the Congress brainstorming camp was on. Patidar leader Hardik Patel also resigned from the party days after the Shivir.