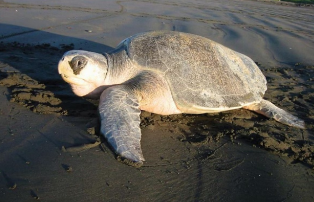 Kendrapara: A 7-month-long fishing ban was imposed on Tuesday at Gahirmatha marine sanctuary by the Marine Fishery Department in a bid to provide security to the endangered Olive Ridley Sea turtle for their annual sojourn for laying eggs.

Ranger of Gahirmatha Marine Sanctuary Manas Kumar Das said the forest personnel will create awareness among the fisherman communities to provide their support to protect and conserve the Olive Ridley sea turtle.

He said Gahirmatha marine sanctuary is considered to be the world’s largest rookery of the Olive Ridley turtle and to protect the marine turtle a congenial atmosphere is needed for the upcoming nesting season.

The Bhitarkanika Forest personnel, Das said, will seek the help from Coast guard, Marine police, and the Fishery department to step up surveillance at Gahirmatha Marine sanctuary.

Notably, as many as 5, 01, 157 Olive Ridley sea turtles had arrived for mass nesting at the golden beach of Nasi-2 within Gahirmatha Marine Sanctuary and laid eggs within a span of three days from March 25 to March 28 last.