He was 86 Dr. Irani is survived by his wife Daisy Irani and his three children, Zubin, Niloufer, and Tanaaz. 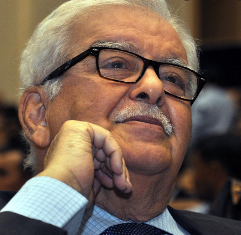 He was 86 Dr. Irani is survived by his wife Daisy Irani and his three children, Zubin, Niloufer, and Tanaaz.

Dr. Irani was associated with Tata Steel for over four decades. He retired from the board of Tata Steel in June 2011, leaving behind a legacy of 43 years, which won him and the Company international acclaim in various fields.

T V Narendran, CEO & MD, Tata Steel in a massage said, “Dr. Irani transformed Tata Steel in the nineties and made us one of the lowest cost steel producers in the World. He helped build a strong foundation on which we grew in the subsequent decades. He was one of the pioneers of the TQM movement in the country. He led with courage and conviction and was a role model and mentor for many in Tata Steel then and now. The employees of Tata Steel past and present are indebted to his leadership during turbulent times.”

Born on June 2, 1936, at Nagpur to Jiji Irani and Khorshed Irani, Dr. Irani completed his Bachelor of Science degree from Science College, Nagpur in 1956 and his Master of Science degree in Geology from Nagpur University in 1958. He then went to the University of Sheffield in the UK as a J N Tata scholar where he secured a Master’s in Metallurgy in 1960 and a Ph.D. in Metallurgy in 1963.

He started his professional career with the British Iron and Steel Research Association in Sheffield in 1963 but always yearned to contribute to the Nation’s progress and returned to India to join the then Tata Iron and Steel Company (now Tata Steel) in 1968, as Assistant to the Director in-charge of Research and Development. He went on to become General Superintendent in 1978, General Manager in 1979, and President of Tata Steel in 1985. He then became Joint Managing Director of Tata Steel in 1988, and Managing Director in 1992 before retiring in 2001.

He joined the Board of Tata Steel in 1981 and was also a Non-Executive Director from 2001 for a decade. Besides Tata Steel and Tata Sons, Dr Irani also served as a Director of several Tata Group companies, including Tata Motors and Tata Teleservices.

Dr Irani was the National President of the Confederation of Indian Industry (CII) for 1992-93. He was conferred several honours, including his appointment as International Fellow of the Royal Academy of Engineering in 1996 and an Honorary Knighthood by Queen Elizabeth II in 1997 for his contributions to Indo-British Trade and Co-operation.

In 2004, the Government of India appointed Dr Irani as the Chairman of the Expert Committee for formation of the new Companies Act of India. He was conferred the Padma Bhushan in 2007 for his contribution to industry. He was the recipient of the Lifetime Achievement Award by the Government of India in 2008 as acknowledgement to his services in the area of metallurgy.

He will be fondly remembered as a visionary leader who led Tata Steel from the forefront during India’s economic liberalisation in the early 1990’s and immensely contributed to the growth and development of the steel industry in India.

Dr Irani was the earliest leaders of the quality movement in India. He enabled Tata Steel to reinvent itself with a focus on quality and customer satisfaction, while becoming the lowest-cost steel producer in the world with quality that could compete in the international market. He was instrumental in starting the Tata Education Excellence Program in 2003 to improve the quality of academic facilitation through a calibrated approach adopted from the renowned Malcolm Baldrige Performance Excellence criteria.

He was a keen sportsman who played and followed cricket till his last and had a passion for stamp and coin collection. Being a metallurgist, his interest in the research, development and collection of metals and minerals is celebrated. His love for the city of Jamshedpur has led to several key developments that will continue to benefit its citizens. His active public life will forever inspire generations.