Yanthungo Patton said unless NSCN (IM) came forward for a solution, the Government is helpless. 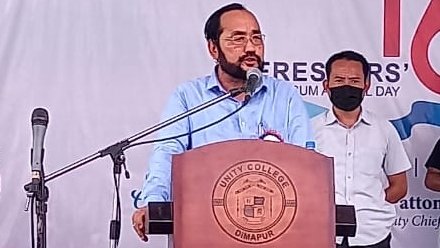 Kohima: Nagaland Deputy Chief Minister Yanthungo Patton has said that the “main obstacle” in the way of solution of the Naga political issue is the demand of the NSCN (IM) for a separate flag and constitution for the Nagas.

Speaking to the journalists in the sideline of a college function, in Dimapur, Patton said that the Nagaland Government Core Committee on the Naga Political Issue will have a serious discussion even as the political parleys between the Centre and the NSCN (IM) remained a deadlock and unable to arrive at a consensus on the NSCN (IM)’s claim for a separate Naga flag and constitution as part of the anticipated solution and it is now entered in its 25th year.

He said according to the Core Committee the Central Government had made it very clear that there would be no separate Naga flag and constitution.

Patton also said the talk was concluded on October 31, 2019, for which all need to work together.

He said unless NSCN (IM) came forward for a solution, the Government is helpless.