Inaugurating the much-anticipated festival of Manipur, Union Minister G. Kishan Reddy said he was lucky to have met groups of 33 different communities in one place, who have come to represent their communities in the festival 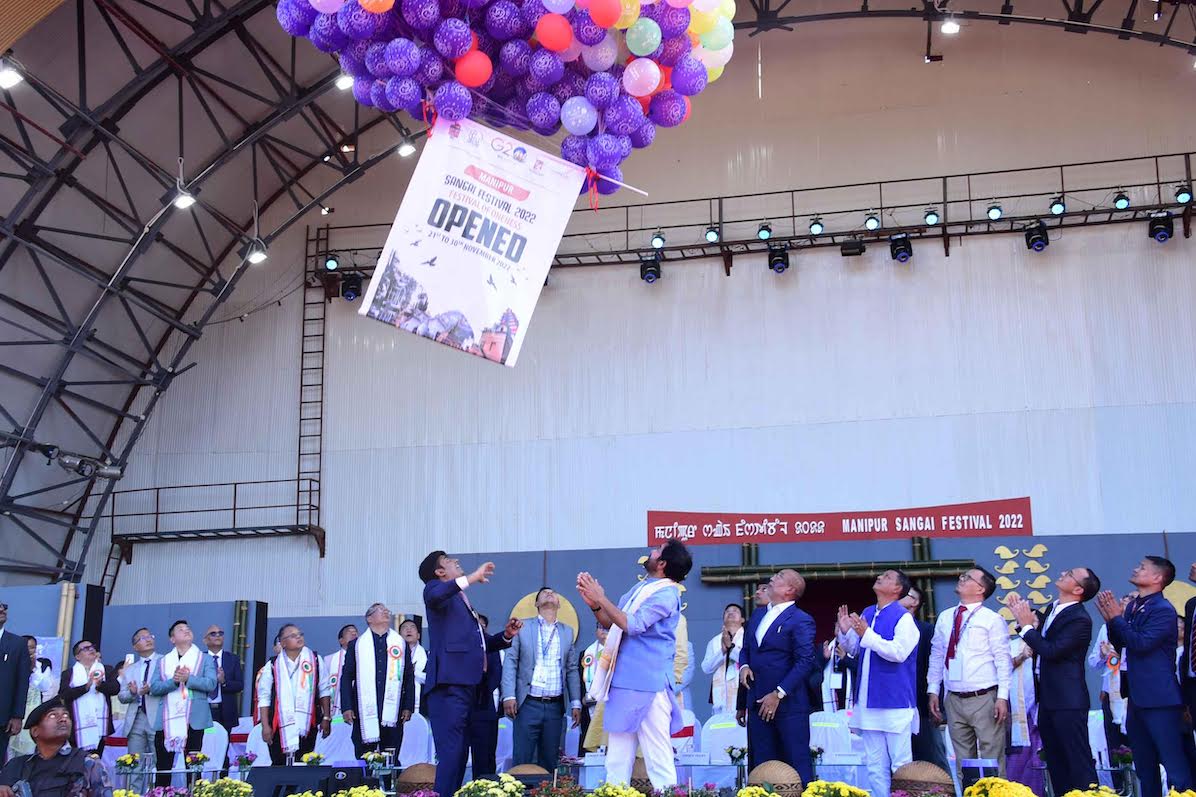 The Festival which commenced Monday will continue till November 30, 2022, at different venues across the State.

Speaking on the occasion, G. Kishan Reddy expressed his gratitude that he got the opportunity to be a part of the festival. He continued that he was lucky to have met groups of 33 different communities in one place, who have come to represent their communities in the festival.

Stating that he could see the celebration of the festival with pomp and gaiety, he invited people across the country to visit the State and witness the beauty of the Festival. He also appreciated the Chief Minister, his cabinet colleagues, MLAs and other officials for organizing the festival in such a grand manner.

He further stated that he would convey to Prime Minister Narendra Modi about the organization of the festival with the construction of permanent structures at the Sangai Ethnic Park.

The Union Minister Spoke on the natural beauty of Manipur and its uniqueness. He continued that the Central Government had always been taking up initiatives for the development of Northeast States adding that the Prime Minister has a big place for the people of Manipur.

He informed that India would host the next G20 Summit and as such many big events would be held across the country. Some events will also be held in the State, he added. He also spoke on various developments taken in different sectors under the leadership of the Prime Minister.

Speaking as the Chief Host of the inaugural function, Chief Minister N. Biren Singh said a clear vision is required to achieve something. He said that the festival is celebrated as the Festival of Oneness to achieve unity through participation of all indigenous communities of the State and to encourage oneness, sense of belongingness, and pride of ownership of the land amongst the people.

The Chief Minister appreciated all those involved in the preparation for the festival, especially the main venue Sangai Ethnic Park at Moirang Khunou. Among others, the Chief Minister lauded MLAs of  Thanga and Moirang and their public for their support and cooperation and said the people didn’t seek even a single rupee as compensation for their land during the developmental work undertaken for the venue.

The Chief Minister also read out a greeting from the Governor for the successful conduct of the festival.

MP Rajya Sabha Maharaja Leishemba Sanajaoba raised concern over the small population of the Sangai, the classification of the Manipur Pony as Endangered and shallow water of the Loktak Lake and drew the attention of the Tourism, Culture and DONER Minister Shri G. Kishan Reddy towards the issues.

“Our state Government is trying all its best. But we need more attention and kind help from the Union Government to save this rarest species Sangai, this endangered species Manipur Pony and one & only freshwater lake in NE- LOKTAK” he said.

Highlighting the tourism potential of the State, the MP said “Our State is endowed with so many beautiful Natural tourist Hotspots, if developed properly, Manipur could be a perfect tourist destination for domestic & foreign tourists.”

“To increase the per-capita income of the state, we have to give serious consideration on Tourism. So the Hon’ble Union Minister is kindly requested to extend maximum help to our state in the development of Tourist Spots & Destinations. Your kind help will make a Great Push to the Economy of the State,” he added.

During the function, the coffee table book Manipur Sangai Festival 2022 of the Tourism Department and Manipur Today Special Edition on Sangai Festival by the Directorate of Information and Public Relations were released.

Earlier in the day, Chief Minister N. Biren Singh inaugurated the Sangai Ethnic Park. The inauguration was attended by Ministers, MLAs, chairman of boards and corporations, and Chief Secretary Dr. Rajesh Kumar among others.