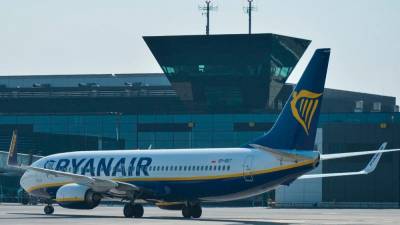 Berlin: A Ryanair plane made an emergency landing in Berlin following a telephone notification that the Irish airline received, Berlin police announced on Monday.

“The Krakow-bound Boeing 737-800 aircraft that departed from Dublin made an emergency landing at the BER airport on Sunday evening, soon after 20:00 [local time, 18:00 GMT]. Prior to that, the Irish airline received a phone notification and invited the pilot to land in the BER airport. After reaching an agreement with the airport, the pilot successfully landed the plane. Federal police got in contact with the pilot and after a detailed assessment decided that the situation was serious. As a result, all the 165 passengers were forced to leave the plane, their luggage was unloaded. All the passengers passed a safety check at the airport and were allowed to stay there. The airport operator was responsible for maintenance and support,” the Berlin police said in a press release.

Dozens of German federal police agents searched the plane with the help of sniffer dogs, the German federal police unit in Berlin said in a statement, in what is indicative of a bomb threat. Nothing suspicious was found and all passengers were sent on their way on another Ryanair plane on Monday morning.

Delhi relaxes lockdown rules, all markets to re-open from June 14