It was at Hayward Field in 2014 that Rojas made her global championship debut, contesting both the long jump and the triple jump. 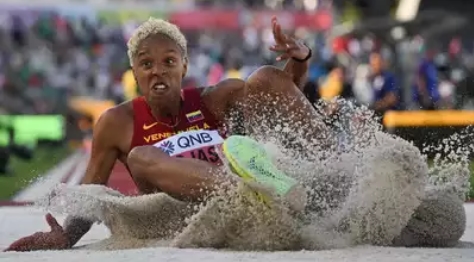 Her jump was just three centimeters off the championship record on Monday – a mark that had stood as the world record from 1995 until Rojas first broke it in Tokyo.

She backed up that second-round 15.47m (1.9m/s) with two more 15.00m-plus jumps, getting gold ahead of Jamaica’s Olympic silver medallist Shanieka Ricketts with 14.89m and USA’s Tori Franklin, whose season’s best performance of 14.72m secured her nation’s first-ever medal in the event at the World Championships and on home soil, too.

It was at Hayward Field in 2014 that Rojas made her global championship debut, contesting both the long jump and the triple jump. Since then, she has won three world indoor titles, become the Olympic champion, and is now a three-time world outdoor champion.

Her last loss at a global championship came in Rio at the 2016 Olympic Games, where the 26-year-old still secured silver, and she now owns eight of the nine best winning marks in history.

“It still hasn’t sunk in yet,” said Rojas. “I wanted a longer jump, but I am happy to return to this beautiful stadium, to see the crowd. More championships will come and I hope to continue adding titles for my country.”