The police said they were compelled to resort to a mild baton charge after the agitators had broken the third barricade put up on the road. 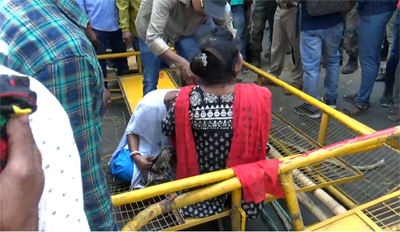 Agartala: A group of retrenched teachers blocked the VIP Road near the Circuit House here on Monday demanding they be allowed to meet Tripura Chief Minister Biplab Kumar Deb for alternative livelihood after they were prevented from marching to the State Secretariat.

At least three agitators including a woman received minor injuries during a police baton charge. The police said they were compelled to resort to a mild baton charge after the agitators had broken the third barricade put up on the road.

“We offered to take to the hospital the persons who claimed to have been hit, but they refused. Since a small gathering continued to sit blocking the road, police are persuading them to clear it. Their demand of meeting the Chief Minister has also been communicated at the appropriate level and we are waiting for the next direction,” said an on-duty police officer.

A few of the agitators were detained at the main gate of the Capital Complex for attempting unauthorised entry into the secretariat. However, the agitating teachers alleged that the police stopped their procession claiming there was no permission for them to move to the state secretariat and immediately started raining batons on them leaving more than 20 teachers including a woman injured.

Police did not even allow their peaceful assembly at the Vivekananda stadium, parking of their two-wheelers and movement in the area most illegally, violating the constitutional provisions, alleged leaders of the Joint Movement Committee (JMC).

JMC leader Bijay Krishna Saha claimed that the “worst possible miscarriage of justice” had been perpetrated on them because as per the Tripura High Court order on May 7, 2014, only 57 teachers lost their jobs and it was upheld by the Supreme Court.

No individual termination notice was issued by the education department, but all 10,323 teachers were terminated en masse. The Chief Minister had made commitments several times that alternative arrangements would be made, but now the State Govenrment was going back on its word and not even allowing the victim teachers to meet him, Saha alleged.