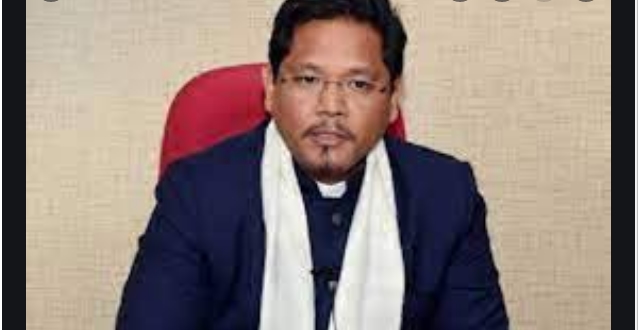 Shillong: Meghalaya Chief Minister Conrad Sangma on Monday reiterated that the residents of the Sweeper’s Lane Colony would be relocated to government-designated accommodations in a phase-wise manner.

“We have already made the whole aspect clear to the people that there are phases to this entire process and the entire process will be done in a phase-wise manner. The first phase will be the land ownership and that has been done now. The second phase will be the shifting of the municipal office, the third phase will be shifting of the
government employees whether municipal or others completely into the designated locations, which are very good locations that they are being given,” Sangma told reporters after a cabinet meeting.

“Finally we will go into the phase where we will find an amicable manner in which we will be able to ask the others or relocate the other people but that is a process as I said we will see and move as it goes along,” the Chief Minister said, adding that the government was making its moves based on the decisions of the high powered committee.
Sangma said the process of relocating the residents from the colony has started and 40 families had already shifted who are working in the departments. “The process of others moving will also start very soon,” he said.
“We are very clear as I said, we need to find a solution to this as it has been pending too long. And this is the first time in the history of the state that any government has taken a very strong step
and a concrete step towards resolving a very long pending issue. We are committed to this and we will carry everybody along, we will talk to the people,” Sangma iterated.

However, the Dalit or Mazhabi Sikhs on Monday also asserted that they would “give up their lives rather than being evicted” from the Sweeper’s Colony, adjoining Ïewduh, the biggest market in the State.
Asked about the Harijan Panchayat Committee (HPC) having rejected the move of the government regarding taking over the land, the Chief Minister said, “Everything has to be moved in a legal manner. Nobody
can go above the law. We are ready to talk to them, we are ready to discuss with them and find an amicable way and resolve this issue”.

“We have examined the latest developments and let me say with all the authority at my command that we will give sleepless nights to the government,” Harijan Panchayat Committee (HPC), Secretary, Gurjit
Singh said.

The three chiefs of the religious institutions -Gurdwara Sahib, Hindu Temple and Church
will petition Meghalaya Governor Satya Pal Malik seeking his intervention as the government plans to demolish places of worship in the area.

“Legally, we are in a strong position and we have no doubt whatsoever that the High Court of Meghalaya status quo orders have been violated by the current moves of the government and when challenged the Courts will throw out and nullify this act of the state Government taken under extraneous pressure and for political
considerations,” Singh said.

Meanwhile, the HPC, members of the Gurdwara Guru Nanak Darbar, the Hindu Temples and the Church of North India, which are located in the area have declared, “We will die in our homes here rather than be
forcibly evicted.”

“We have examined the latest developments and let me say with all the authority at my command that we will give sleepless nights to the government. The assurances of the government do not cut ice, in fact,
they are full of loopholes and obfuscation of facts and figures. Let it be known to all concerned that this is a fight for our survival and habitat and we will spare no effort to win this battle of honour,
dignity and legitimate rights,” Singh asserted.