The monetary panel will act to support growth by retaining its accommodative stance for as long as necessary, Das said. 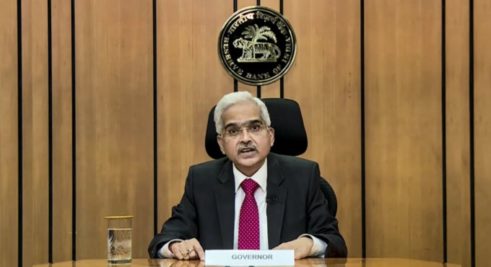 Mumbai: The Reserve Bank of India (RBI) on Friday kept the key rates unaltered for the sixth consecutive time in its June policy review meeting.

The Apex Bank lowered its estimate for economic growth to 9.5 per cent for the current fiscal from earlier projection of 10.5 per cent due to the impact of the second Covid-19 wave.

The monetary policy committee (MPC), headed by Governor Shaktikanta Das, voted unanimously for retained repo rate at 4 per cent and reverse repo rate at 3.35 per cent.

The monetary panel will act to support growth by retaining its accommodative stance for as long as necessary, Das said.

The Central Bank stuck to its accommodative stance mainly on account of uncertainty over the impact of the second wave of Covid-19 pandemic.

In his address after the policy outcome, governor Das said that the Reserve Bank will continue to think and plan “out of the box”.

On inflation, he said that retail inflation is likely to be 5.1 per cent during the current fiscal.

MPC has been given the mandate to maintain annual inflation at 4 per cent until March 31, 2026, with an upper tolerance of 2 per cent.

The RBI had last revised its policy rate on May 22, 2020, in an off-policy cycle to perk up demand by cutting interest rato to historic low.

Das announced that RBI has lowered its estimate for economic growth to 9.5 percent for 2021-2022 from earlier projection of 10.5 percent due to the impact of the second COVID-19 wave.