Singh, accompanied by Chief Minister Himanta Biswa Sarma, also circumambulated the temple and offered his obeisance to the goddess. 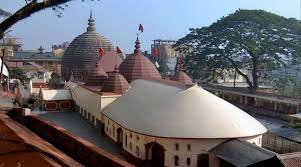 Guwahati: Defence Minister Rajnath Singh on Friday visited the famed Kamakhya Temple atop the Nilachal Hills in Guwahati to offer his prayers.

The temple is currently closed due to the COVID restrictions and Singh offered his prayers from outside the main door that leads to the sanctum sanctorum, the PTI reported.

Singh, accompanied by Chief Minister Himanta Biswa Sarma, also circumambulated the temple and offered his obeisance to the goddess.

The minister arrived here on Thursday evening after dedicating 12 strategic roads, constructed by the Border Roads Organisation, at Kimin in Arunachal Pradesh.

He spent the night at Raj Bhavan where Governor Jagadish Mukhi hosted a dinner in his honour, which was also attended by Sarma, former chief minister Sarbananda Sonowal and Assembly Speaker Biswajit Daimary.

Singh is scheduled to visit a COVID Hospital built by the DRDO at Sarusajai Stadium before leaving for New Delhi.