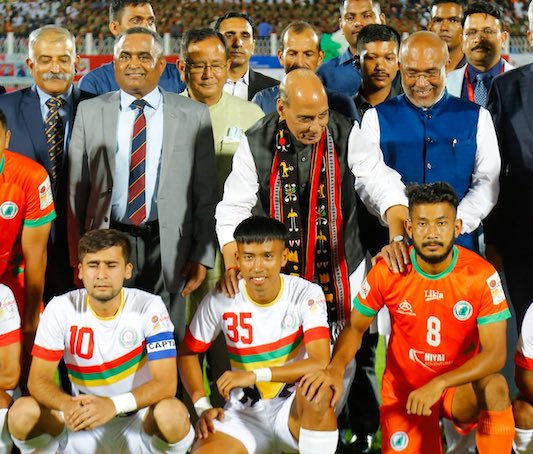 Rajnath addressing the packed 25000 capacity stadium said the region has seen a wave of changes in various sectors like health, education, transport, agriculture and urban development .

He said that the Government believes in ensuring progress of all States/Union Territories, stressing that special emphasis is being laid towards infrastructural development in far flung areas.

“We have connected the remote areas with the mainland by providing connectivity,” he said.

Rajnath said that the first Durand Cup match in Manipur, at a time when the country is celebrating ‘Azadi ka Amrit Mahotsav’, symbolises the rise of a ‘New India’, in which every region and state is moving forward hand-in-hand to take the country to greater heights.

He voiced the Government’s resolve to encourage all kinds of sports, stating that due to the efforts in the last few years, India has scaled newer heights of success in major sporting events such as Olympics, Asian Games and Commonwealth Games.

Players from all regions in the country are now getting equal opportunities, the results of which are now visible, he said.

He lauded the Armed Forces, who besides protecting the Nation, are bringing medals for the country in different disciplines at these Games.

For the first time, Manipur is co-hosting the Durand Cup, one of the oldest football tournaments, along with Assam. After a short power packed opening ceremony the two teams started the battle with Neroca scoring the first goal in the 16th minute courtesy a goal by Tangva Ragui . Three minutes later Trau’s Komron Tursunov equalized thus igniting an exciting match.

Neroca’s Thomyo and John Chidi also scored one goal each thus sealing the match 3-1 in favour of Neroca. Neroca will take on the Army Red on August 24, while TRAU will clash with Hyderabad FC on August 22 at the same venue .