The newly-built Greenfield Airport at Hollongi near here, named as ‘Donyi Polo Airport, Itanagar’ by the State Government, is likely to be inaugurated in October next. 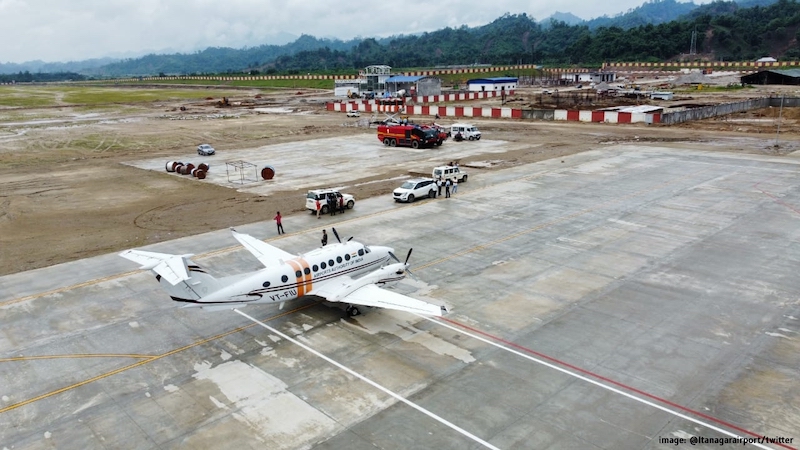 The newly-built Greenfield Airport at Hollongi near here, named as ‘Donyi Polo Airport, Itanagar’ by the State Government, is likely to be inaugurated in October next.

“Once we get the DGCA authorization we will operate the two Dornier aircrafts, which have been kept at Dibrugarh airport, within Arunachal Pradesh,” stated the Chief Minister.

Khandu said, apart from two airports at Tezu and Pasighat in central Arunachal, the state has, as of now, eight Advanced Landing Grounds (ALGs) with two of them being operationalised for helicopter services and six for fixed wing aircrafts.

He was speaking at the inauguration of the two-day Regional Conference on “Bringing Citizens and Government Closer through Administrative Reforms” here today.

Hailing the Government of India for organizing the conference in Itanagar, Khandu said, “It would be  a very successful model for Arunachal Pradesh”.

He asserted that administrative reforms were a must for bringing change in governance and bringing it closer to the people.

“Lots of transformations occurred over the period of last eight years,” the Chief Minister said and added, it was due to the efforts of Prime Minister Narendra Modi and dedicated bureaucracy. “Prime Minister has changed the dynamics of leadership – all stakeholders starting from chief minister, ministers to officers are all working in a focused way.”

Talking about own state, Khandu said Arunachal Pradesh, located in the easternmost part of the Northeast, has unique challenges and that the state cannot be compared with other states. The Central Government should be kind enough to consider its issues and challenges.

Sharing his government’s various groundbreaking initiatives during the last 6-7 years, Khandu said the biggest reform brought by the state government was the “fair and transparent” process of recruitment thereby putting a full stop on corrupt practices in recruitment.

He also informed that under the ‘Sarkar Aapke Dwar’ initiative, launched five years back, more than 1000 camps have been conducted across the state benefitting over 12 lakh populations by delivering the public services, including the benefits of PM and CM flagship programmes, at the people’s doorsteps.

Mentioning the much-needed technology-based interventions for better results, Khandu said, “By October 2022, all the State Government offices would be on-boarded into the e-Office platform.”

With the offices of several State Government departments already converted into e-Office along  with the State Civil Secretariat, the CM informed that under the e-Office initiative, around eight  lakh e-Files have been moved so far.

He also informed that being a pioneer in adopting e-Governance module, the Arunachal Pradesh Government has decided to observe the year 2022-23 as the Year of e-Governance, while adding that the State will take up 22 e-Governance projects to mark the year to “bring in total quality management in governance”.

“Today, we are in such a position that we can make things happen, we can get things changed….We should work as a team in the larger interest of the state as well as the country. We, in Arunachal Pradesh, are working as a Team Arunachal’ and have brought lots of reforms over the years,” he added.