Rajnath, Jaishankar to be in Tokyo for 2+2 dialogue

The issues likely to be discussed in the 2+2 Meeting include the possibility of Japan's investment in the defence sector, sharing of technology etc. 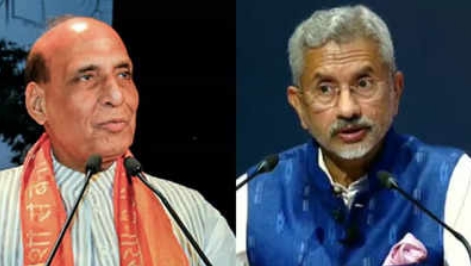 The Indian ministers are also expected to hold separate meetings with their Japanese counterparts in addition to the 2+2 dialogue.

The issues likely to be discussed in the 2+2 Meeting include the possibility of Japan’s investment in the defence sector, sharing of technology etc.

India -Japan Special Strategic and Global Partnership is based on shared values of democracy, freedom and respect for rule of law, the MEA said.

During the visit, the two sides will further explore new initiatives to strengthen the partnership.

Japan and India are members of the Quad along with the US and Australia. The four countries also take part in a joint naval exercise to which China has always expressed displeasure.

On Monday and Tuesday, senior officials from the Foreign Ministries of Quad discussed regional and global developments in New Delhi reaffirming their vision for a free, open and inclusive Indo-Pacific.

Japan is one of the few countries India holds a 2+2 meeting with. The other such countries are the US, Australia and Russia.