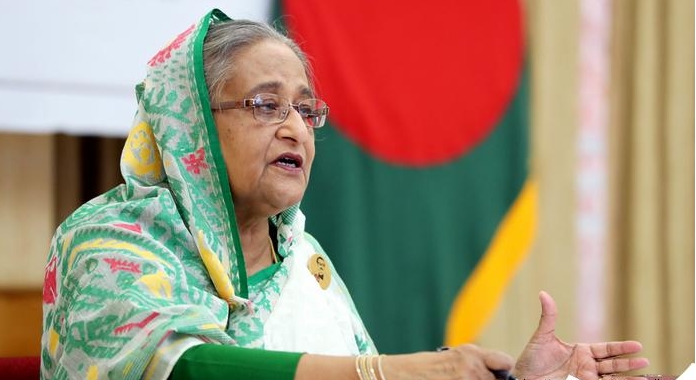 New Delhi: Prime Minister Sheikh Hasina on Tuesday urged Indian industrialists to invest in Bangladesh, saying her country had the most liberal ecosystem for investment in infrastructure, manufacturing, energy, and transport sectors.

“I would urge Indian investors to consider possible investments in infrastructure projects, manufacturing, energy, and transport sectors. Indian investors and business houses can set up industries in Bangladesh through buy-back arrangements by reducing time, cost, and resources,” she said here.

She also said that Bangladesh had the most liberal investment regime in the region with a wide array of facilities, attractive incentive policies, and consistent reforms.

The Prime Minister was addressing a business event jointly organized by the Federation of Bangladesh Chambers of Commerce and Industry (FBCCI) and the Confederation of Indian Industry (CII).

Presently, Hasina said 100 special economic zones and 28 high-tech parks were being set up across the country aimed at encouraging investment and rapid economic development through the increase and diversification of industry, employment, production, and export.

“For Indian investors, two dedicated Special Economic Zones at Mongla and Mirsari are being developed. I urge the business houses present here today to invest there.”

The Prime Minister said it would further pave the way to harness the goodwill among the two countries and bring economic prosperity to the region as Bangladesh was uniquely located to enable Indian investors to export their products to both India’s northeast and to Nepal, Bhutan, and Southeast Asia.

Indeed, the time was ripe for the Indian business community to focus on Bangladesh and take advantage of its economic growth, cheaper cost, and huge consumer base, she underlined.

She said Bangladesh was India’s most important development and trading partner. India received the highest number of tourists and medical patients from Bangladesh. At the same time, thousands of Indians now worked in Bangladesh.

“The business communities of both countries should draw close and play their due role in fostering mutual prosperity and economic advancement of our peoples.”

The Prime Minister said that the Covid-19 pandemic had greatly affected global trade while the war in Ukraine had caused a significant rise in commodity and fuel prices.

“This has led many countries, including those of South Asia, to suffer from an acute economic crisis,” she said.

However, she said it was heartening to note that despite the challenges, India was among the foremost fastest-growing major economies in the world.

The Prime Minister spoke glowingly about the economic growth of Bangladesh, which at one time was hit repeatedly by famines and depended on aid for food.

“Bangladesh is today self-sufficient in food. It is now one of the largest global producers of rice, vegetables, grains, and fresh-water fish to name a few,” she said.

Her country was also today a global example of disaster preparedness and management, she said, adding that Bangladesh was now seeing a development miracle.