Qatar is the reigning AFC Asian Cup champion and will be hosting the Continent’s most prestigious men’s tournament for the third time after staging the 1988 and 2011 editions. 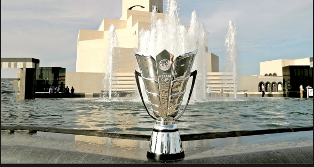 Chairing the 11th AFC Executive Committee meeting, AFC president Shaikh Salman bin Ebrahim Al Khalifa congratulated the QFA on their successful bid and also conveyed the appreciation of the Asian football family to the Football Association of Indonesia (PSSI) and the Korea Football Association (KFA) for their proposals.

“Given the short lead time in preparation, we know that the hard work begins immediately but with their existing world-class infrastructure and unrivaled hosting capabilities, we are confident that Qatar will stage a worthy spectacle befitting the prestige and stature of Asia’s crown jewel.” the AFC president said.

Qatar is the reigning AFC Asian Cup champion and will be hosting the Continent’s most prestigious men’s tournament for the third time after staging the 1988 and 2011 editions.

The AFC Executive Committee also deliberated upon the bidding proposals for the AFC Asian Cup 2027 and shortlisted the All India Football Federation (AIFF) and the Saudi Arabian Football Federation (SAFF) as the final two bidders with the hosting decision to be taken by the AFC Congress at its next meeting in February 2023.

The decision brings to a close the bid proposal of the QFA who were considered to have withdrawn from the 2027 race following their successful 2023 bid in accordance with the applicable bidding regulations.

“Across our competitions, we are seeing our digital engagement and TV viewership grow in record numbers and it is our responsibility to ensure that each tournament surpasses the achievements of the previous edition.

“In the All India Football Federation and the Saudi Arabian Football Federation, we have two exemplary bids, and I am confident that the Qatar Football Association will strengthen the foundations for the eventual 2027 hosts to build upon.”