Putin gave Bettel a principled assessment of Kiev's destructive actions, which led to a deadlock in the negotiations on Donbas. 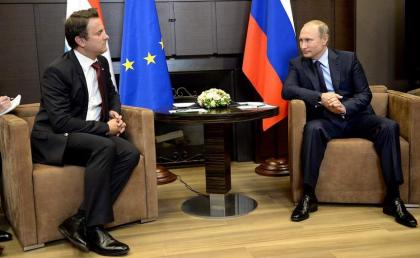 Moscow: Russian President Vladimir Putin discussed with Luxembourg Prime Minister Xavier Bettel the prospects for settlement in Ukraine and the migration situation on the borders of Belarus with EU countries, the Kremlin said on Wednesday.

The conversation took place on the initiative of the Luxembourg side.
“Issues related to the prospects for resolving the conflict in southeastern Ukraine, as well as the migration situation on the borders of Belarus with EU countries, were thoroughly discussed,” the statement says.

Putin gave Bettel a principled assessment of Kiev’s destructive actions, which led to a deadlock in the negotiations on Donbas.

“The need was emphasized for the full and unconditional implementation of the Minsk Package of Measures by the Ukrainian authorities,” the statement says.

“At the request of his interlocutor, Vladimir Putin briefed him about the Russian initiative regarding long-term legally enshrined security guarantees that rule out further NATO advance eastward and the deployment of weapons systems that threaten Russia in neighboring states, primarily in Ukraine,” it said.

Bettel, in a conversation with Putin, spoke in favor of more intensive contacts between EU institutions and Russian representatives, the Kremlin said.

In addition, the leaders exchanged congratulations on the upcoming Christmas and New Year holidays.