Attacking Modi, Khera further said: "Now, he sounds very tired. There is no feeling or energy in his words. The PM is becoming 'victim' of his own words." 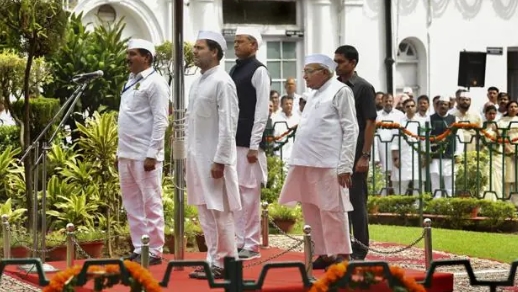 New Delhi: The Congress on Monday took a dig at Prime Minister Narendra Modi over various promises, including doubling farmers’ income to the ones he had made to the countrymen when he came to power at the Centre, and claimed that the latter is becoming a victim of his own ‘words’ as he has failed to fulfill the same.

“Independence Day is a historic day. There was a hope that PM will deliver a ‘matured’ speech. The nation was hoping that PM will present the ‘report card’ of his 8 years. But, he disappointed the country on a day, especially when the world was watching on Red Fort (from where PM delivered his I-Day speech),” he said.

“What happened to the promises of doubling farmers’ income, bringing ‘black money, giving employment, and others? The promises he made are ‘haunting’ him,” Congress’ chairman of the media department Pawan Khera told reporters at the party headquarters here while reacting to PM’s Independence Day speech.

Attacking Modi, Khera further said: “Now, he sounds very tired. There is no feeling or energy in his words. The PM is becoming ‘victim’ of his own words.”

Asked about “parivarwad” (nepotism) which PM Modi mentioned in his speech, the Congress leader said, “I feel this is an internal matter of BJP. This attack has been made on his own Ministers. It might be on Home Minister (Amit Shah), whose son is holding the top post in a cricket body, or Civil Aviation Minister (Jyotiraditya Scindia), or Defence Minister (Rajnath Singh) son. We don’t know on whom the attack meant.”

New Delhi: Prime Minister Narendra Modi on Sunday said that the government has given a lot of emphasis in...
World