NDA candidate Droupadi Murmu is in the fray against Opposition candidate Yashwant Sinha for the position of the 15th President of India. 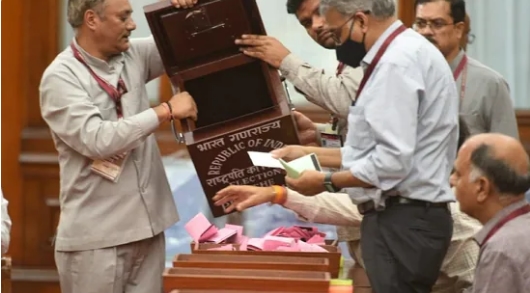 New Delhi: The counting of votes for the Presidential poll began at 11 am in Room Number 63 in the Parliament House complex on Thursday. The votes cast by MPs are being counted first. The results will be declared sometime in the afternoon.

The area around the counting center has been declared a sanitized zone with the presence of only the officers involved in the counting process, presidential candidates, and their authorized representatives. Election Commission observers and Correspondents with valid EC-issued passes are also allowed in the complex.

Rajya Sabha Secretary General PC Moody is the returning officer for the Presidential election. The authorities have made arrangements for discipline, and proper decorum so as to ensure the conduct of peaceful counting.

The Presidential election took place on July 18 with elected members of Parliament and the Legislative Assembly comprising the electoral college voting to elect the next President.

Out of a total of 4,025 eligible MLAs for voting in the Presidential election, a total of 3,991 MLAs voted. A total of 771 MPs voted in the polls out of the total 763 eligible MPs.

NDA candidate Droupadi Murmu is in the fray against Opposition candidate Yashwant Sinha for the position of the 15th President of India.

The trends on the day of polls indicated a clear majority in favor of Murmu, with many non-NDA parties declaring allegiance to the first tribal woman candidate for the post.

The ruling BJP expects Murmu to get two-thirds votes in the polls for the highest office in the country.

The new President will be sworn in on July 25, succeeding President Ram Nath Kovind.

Murmu if voted would be the first President of India born post-independence and the youngest ever at the age of 64 years. She was born on June 20, 1958.