President Droupadi Murmu arrives on a two-day visit to Odisha

The Odisha government has declared a half-day holiday in Bhubaneswar Municipal Corporation areas on Thursday for the visit of the President. 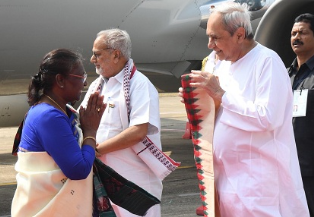 It is the first visit of Murmu to the state after assuming the office of the President of India.

Odisha Governor Prof.Ganesh Lal, Chief Minister Naveen Patnaik and other senior officials received her at the airport where she was given a guard of honour.

Upon arrival at the Biju Patnaik International airport, the President flew to Puri in a special chopper to have darshan of Lord Jagannath, his elder brother Balavadra and their sister Devi Subhadra and the other deities inside the temple complex.

She will be escorted to Sri Jagannath temple where Gajapati Dibyasingh Dev and Temple Chief Administrator Vir Vikram Yadav along with the members of the temple Temple managing committee besides the district magistrate, SP and President’s family priest will receive her at the temple main gate.

She will be guided to the sanctum sanctorum of the 12th-century shrine for the darshan of the lords on the Ratnasimhasan and offer prayers.

The President will also have darshan of deities in the small temples like Mahalaxmi and Vimala located in the Sri Jagannath temple complex.

She will garland the statue of Utkalmani Gopabandhu Das situated near the Simhadwar of the temple and then proceed to Raj Bhavan.

At Raj Bhavan, she will be served Mahaprasad. In the afternoon she will leave for Bhubaneswar by helicopter to attend other functions.

The Odisha government has declared a half-day holiday in Bhubaneswar Municipal Corporation areas on Thursday for the visit of the President.

An order issued by the Revenue and Disaster Management department on Wednesday said all government offices, schools and colleges (Government and Private ) coming under the Bhubaneswar Municipal Corporation area will remain closed after 1 PM on Thursday on the occasion of the President’s visit.