PM’s vision to be accomplished through resolutions: Sikkim CM

Issues related to Police and the Police Act were discussed during the meeting. 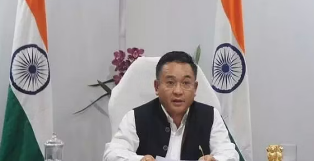 Gangtok: Sikkim Chief Minister PS Tamang has affirmed that his state would work towards implementing the goals set by Prime Minister Narendra Modi for Team India. ‘We will work towards accomplishing the PM’s vision of Team India. Resolutions will be adopted exclusively for it, including the building of a developed India,” said Tamang while speaking at the chind=tan shibir (brainstorming session) organized by the Union Home Ministry for the Home Ministers of states in Haryana’s Suraj Kund on Friday. Modi addressed the session.

‘Freedom from every thought of slavery, pride in heritage, unity, solidarity, and civic duty will also be focused on by adopting resolutions on these issues,” the chief minister said.

Issues related to Police and the Police Act were discussed during the meeting.