The HTT-40 aircraft has state of art contemporary systems and has been designed with pilot-friendly features. 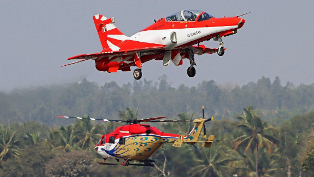 The Prime Minister will inaugurate India’s biggest ever five-day long defence exhibition DefExpo 2022 at Mahatma Mandir Convention and Exhibition Centre at around 9:45 AM and thereafter visit the India Pavilion to unveil the trainer aircraft.

The HTT-40 aircraft has state of art contemporary systems and has been designed with pilot-friendly features.

The aircraft has already received its clearance certificate from the Centre for Military Airworthiness and Certification (CEMILAC) based on extensive design evaluation, testing of aircraft systems and comprehensive flight testing carried out by the HAL Flight Operations team along with pilots from IAF.

The project also set a record as the fastest to reach certification from the first flight.

In February last year, Hindustan Aeronautics Limited received a Request for Proposal (RFP) from the Indian Air Force for their Basic Trainers requirement at the Aero India 2021 in Bengaluru. The RFP was for 70 HTT-40 Basic Trainer Aircraft with provision for 38 more.

The trainer has more than 60 per cent indigenous content and is supported by agencies such as the Centre for Military Airworthiness and Certification (CEMILAC), Regional Director Aeronautical Quality Assurance (RDAQA), and Aircraft and Systems Testing Establishment (ASTE) among others.

During the programme at the DefExpo 2022, the Prime Minister will also launch Mission DefSpace here to develop innovative solutions for the Defence Forces in the Space domain through industry and startups.

Besides, the Prime Minister will lay the foundation stone of Deesa airfield in the Banaskantha district of Gujarat. As per sources, the air base, situated just 130 km from the Pakistan border, will be operational by 2024.

The forward airforce base will add to the security architecture of the country. Experts believe that the strategically located airbase will add teeth to the IAF’s prowess along the western border.

Modi is on a two-day visit to Gujarat on Wednesday and Thursday where he is set to dedicate and lay the foundation stone of projects worth around Rs 15,670 crore.