Tripura has already embarked into I-way after the operation of a third international internet gateway through submarine cable via Cox’s Bazar of Bangladesh. 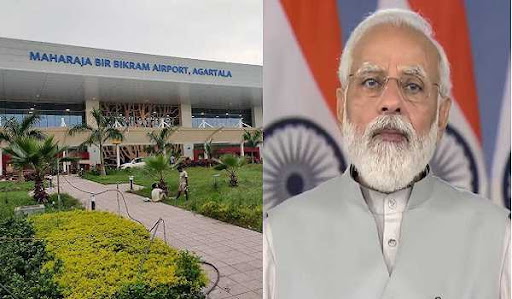 Agartala: Prime Minister Narendra Modi on Tuesday dedicated the MBB’s airport’s newly-built integrated terminal – capable of handling at least 1200 passengers at a time and 15 lakh travellers per annum – here to the nation.

Spread over 30,000 sq metre areas, the modern eco-friendly terminal was built at the cost of Rs 450 crores. Four aerobridges have been put in place for seamless passenger movement, facilitating air transport of local produces and products internationally to boost trade, tourism and economy.

“The new terminal building to the latest facility is the commitment of Prime Minister to fulfil his promise of the most important component of the HIRA model for Tripura. Modiji had promised to make the state a gateway of Northeast by installing best quality Highways, I-way (internet), Roadway and Airway and today we achieved international standard airways facility,” said Deb, who was present at the function along with Civil Aviation Minister Jyotiradiya Scindia.

Tripura has already embarked into I-way after the operation of a third international internet gateway through submarine cable via Cox’s Bazar of Bangladesh.

Half of the work of national standard highways has been completed and the Maîtree bridge over River Feni connecting Tripura with Bangladesh has opened up an opportunity for trade and business with South East Asia via Chittagong seaport. The works are progressing for improvement of internal road connectivity and development of waterways through Bangladesh, Deb pointed out.

The Prime Minister launched Mission 100 – Vidyajyoti Schools for holistic and creative education to 1.2 lakh children under CBSE. The schools will have ICT laboratories, vocational education for igniting minds and become centres of excellence with the investment of Rs 500 Cr.

The project has been mandated to incentivise Rs 6 lakh for Gram Panchayats and Village Committees on saturation.