“The two Prime Ministers reaffirmed their commitment to advance efforts to facilitate the smooth and timely implementation of the Mumbai Ahmedabad High-Speed Rail Project,” he said. 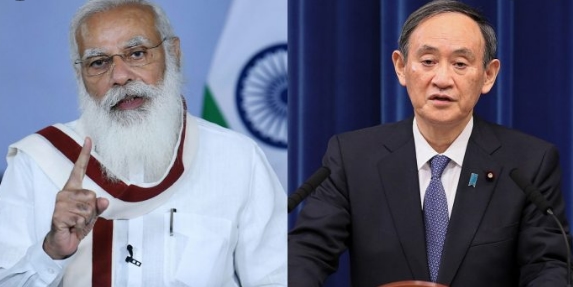 “With regard to the bullet train, Prime Minister Modi and Japanese Prime Minister Suga discussed the importance of this project. They expressed satisfaction that the project has been going well. They also noted that Prime Minister Suga had taken a special interest in moving that project forward,” Foreign Secretary Harsh Vardhan Shringla said at a media briefing later on the talks on Thursday.

“The two Prime Ministers reaffirmed their commitment to advance efforts to facilitate the smooth and timely implementation of the Mumbai Ahmedabad High-Speed Rail Project,” he said.

The over 500-km Mumbai-Ahmedabad bullet train project is being built at an estimated cost of Rs 110,000 crore, of which Rs 88,000 crore is being funded by the Japan International Cooperation Agency (JICA).
PM Modi later tweeted on his “excellent meeting” with Prime Minister Suga:

“Japan is one of India’s most valued partners. I had an excellent meeting with PM @sugawitter on a variety of subjects that would further boost cooperation between our nations.

“A strong India-Japan friendship augurs well for the entire planet,” he posted.

During the meeting, Prime Minister Suga mentioned specifically on a number of occasions to the special relationship that India and Japan enjoy and the global partnership that binds the two countries together, the Foreign Secretary said.

The two Prime Ministers discussed, exchanged views on recent global developments including Afghanistan. They also reaffirmed their commitment towards the free, open inclusive Indo-Pacific region. They agreed to enhance bilateral, security and defence cooperation, including in the areas of defence equipment and technologies, a statement said.

PM Modi also welcomed increasing economic engagement, including the launch of The Supply Chain Resilience Initiative between India, Japan and Australia, which has been an ongoing dialogue since last year.

There was also an emphasis on the need to develop bilateral partnerships in manufacturing, in the MSME sector, skill development.

Prime Minister Modi highlighted the need to develop bilateral partnerships in manufacturing, MSME and skill development. Prime Minister Suga informed Prime Minister Modi that in order to operationalize the Specified Skilled workers (SSW) agreement which was signed earlier this year, the Japanese side would be undertaking skill and language tests in India from early 2022.

India and Japan have a mobility agreement that enables Indian professionals to work in Japan for certain periods of time.

The India-Japan Digital Partnership was mentioned especially in the startup sector and both exchanged views and further collaborations in areas, like 5G and cyber security.

Both also discussed the bilateral development projects that Japan is supporting, especially in the Northeastern part of India under the India-Japan ‘Act- East Forum’. Both noticed possibilities of further cooperation in areas such as healthcare, disaster management and bamboo value chain development in the Northeast.

Both sides expressed confidence that the momentum achieved in the relationship in the last few years would continue under the new administration in Japan and Prime Minister Modi said he looks forward to welcoming the next Prime Minister of Japan to India for the India-Japan Annual Summit.

Prime Minister Suga has said he will not run for re-election as party leader this month, signalling the end of his tenure.