"On this 73rd Republic Day, our Hon'ble Prime Minister Shri Narendra Modiji once again adorn his favourite Leirum Phee (Lengyan). What a moment of great pride for all of us," Manipur Chief Minister N Biren Singh said in a tweet. 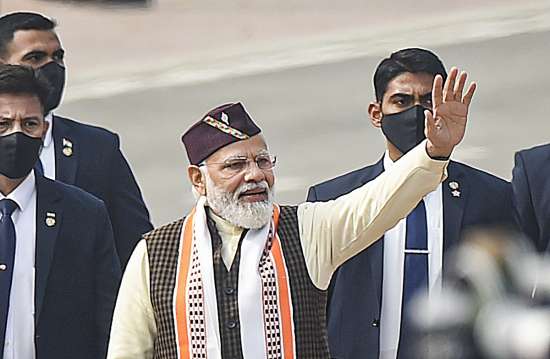 New Delhi: Prime Minister Narendra Modi on 73rd Republic Day donned a cap from Uttarakhand and a stole from Manipur and was as much a part of every conversation involving the special celebrations on Rajpath.

Ditching his traditional ‘safa’ or turban look, the PM donned a cap with Uttarakhand’s state flower Brahma Kamal. “Today on the occasion of 73rd Republic Day, Hon’ble Prime Minister Shri Narendra Modi Ji has made the culture and tradition of our state proud by wearing the cap of Devbhoomi Uttarakhand, adorned with Brahma Kamal,” Uttarakhand Chief Minister Pushkar Singh Dhami said in a tweet.

Turbans — long safas, pagris with long plume have been a highlights of the prime minister’s wardrobe on Independence Day and Republic Day events. Last year on the same day he wore one from Jamnagar, Gujarat. On last independence day it was a bright saffron and red head gear with a long plume.

Sometimes, they have long trails anything comes out as striking is carried well by Modi and his sartorial choices are keenly followed by many.

He also wore a Manipuri Meitei Lengyan, a traditional Manipuri scarf. “On this 73rd Republic Day, our Hon’ble Prime Minister Shri Narendra Modiji once again adorn his favourite Leirum Phee (Lengyan). What a moment of great pride for all of us,” Manipur Chief Minister N Biren Singh said in a tweet.

Both Uttarakhand and Manipur are among the five states that are going to polls in the coming days. The PM appears to love making these statement by wearing a dress or accessories from different states on important occasions. Even while being administered the Covid vax shots last year, he once wore a gamcha.