The Prime Minister also pointed out that Naidu has overseen both the portfolios - Rural Development as well as Urban development. 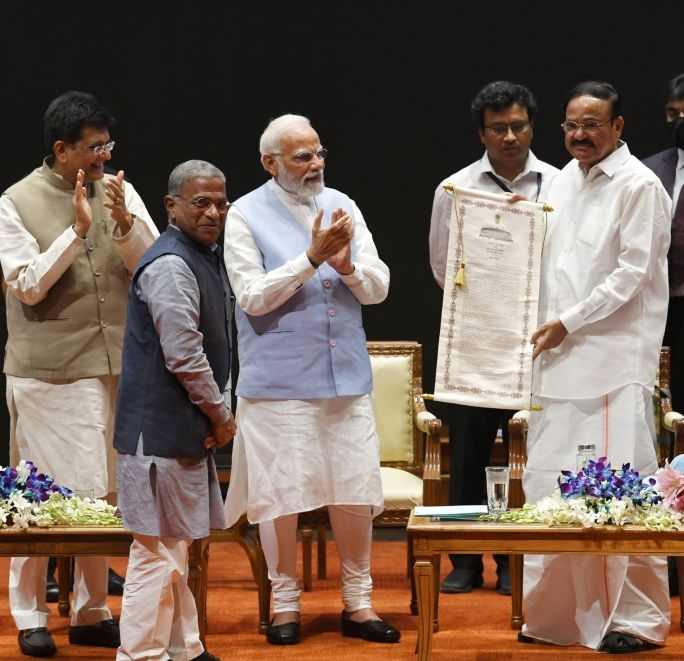 The function was organized in the evening to bid farewell to the Vice President.

Speaking on the occasion, the Prime Minister pointed out the quality of Venkaiah Naidu of always staying active and engaged which, he said, will always keep him connected with public life.

Modi recalled his long association with Venkaiah Naidu and remembered Naidu’s preference for Rural Development as a portfolio when he was to be picked up as a Minister in the Vajpayee government.

The Prime Minister also pointed out that Naidu has overseen both the portfolios – Rural Development as well as Urban development.

“This and the experience of Parliamentary Affairs Minister helped him run the House with great command and ease,” the Prime Minister said.

He also appreciated Naidu’s quest to empower and enhance the capabilities of the House, its members, and the Committees.

The Prime Minister said that it is important that we should always try to fulfill the expectations that he has from all the MPs.

Praising Naidu’s discipline of time-management, the Prime Minister remembered how during the time of Corona restrictions, the Vice President did ‘tele-yatras’ that is getting in touch with people who figured in his long public life over the phone, giving solace and encouragement during the difficult times.

Similarly, he stayed in touch with all the MPs during the pandemic.

The Prime Minister also remembered the incident when during a visit to Bihar, Naidu’s helicopter had to be force landed and a farmer helped him.

The Prime Minister said that Naidu has maintained contact with the farmer and his family till today.

The Prime Minister expressed the hope that he will continue to guide the people in public life with the same dedication and wisdom for a very long time to come.

Acknowledging Naidu’s regard for the mother tongue, the Prime Minister mentioned Bhashini – National Public Digital Platform for languages to develop services and products for citizens by leveraging the power of artificial intelligence and other emerging technologies. He asked the members of both houses to take a look.

He also asked the Speaker and Rajya Sabha Deputy Chairman to collect good new words that have emerged due to debates in the mother tongue and add them to enrich the languages of the country.

“By starting the annual tradition of releasing a collection of good words, we will take forward Venkaiah ji’s legacy of love for the mother tongue,” he said.

A chronicle of Naidu from 2017 to 2022 titled ‘Interacting-Involving-Inspiring’ was also released by the Prime Minister.

Speaking at the function Naidu said that these last five years have been the most eventful, enlightening, and energizing years of his life.

He said that everyone should contribute to India’s standing and not belittle the accomplishments made by the country.

Naidu said that India has come a long way in these years but there are still many formidable obstacles to progress that must be identified and removed.

He further stated that there is a need to ensure equitable access of all the citizens to resources and opportunities to study, work, and grow into enlightened, empowered individuals.

In concluding his speech, Shri Naidu requested Members to follow 3 Ds – Dignity, decency, and debate and not resort to the fourth D – Disruption.

The function was attended by Lok Sabha Speaker Om Birla, Leader of the House Piyush Goyal, Leader of the Opposition, Mallikarjun Kharge, Parliamentary Affairs Minister Pralhad Joshi, Members of Council of Ministers, and the Members of both Rajya Sabha and Lok Sabha.