The explosive accusations prompted calls by the opposition for the resignation of Deshmukh who denied the charges and said he will sue Singh for defamation, NDTV reported. 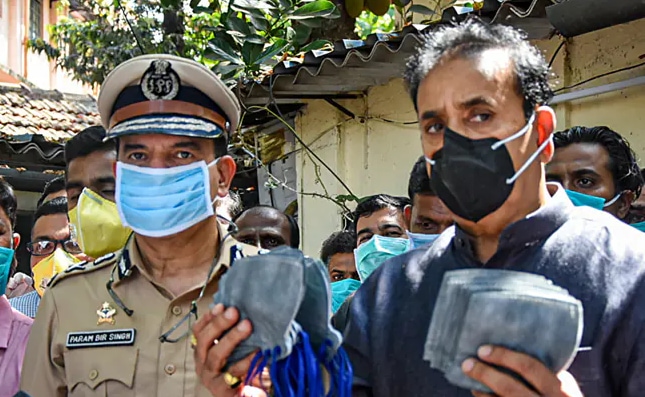 The explosive accusations prompted calls by the opposition for the resignation of Deshmukh who denied the charges and said he will sue Singh for defamation, NDTV reported.

In a letter to Chief Minister Uddhav Thackeray titled “untruthful statements by the Hon’ble Home Minister, Maharashtra”, Singh said the minister had appointed several of his officers – including Sachin Waze who has been arrested in the Mukesh Ambani case – for running an extortion racket.

He said the Home Minister had asked several of his officers to collect money from restaurants, pubs, bars and hookah parlours, setting them a target of ₹ 100 crore every month as recently as February this year.

The former police chief also said that the Home Minister had on several occasions instructed police officers on how to handle cases and file charges, often summoning them to his home to “bypass” him and other seniors.

Singh wrote how at one of the briefings at Thackeray’s home following the Mukesh Ambani incident in mid-March, he had “pointed out several misdeeds and malpractices being indulged into by the Hon’ble Home Minister”.

“I have similarly briefed the Hon’ble Deputy Chief Minister, Maharashtra, the President of the Nationalist Congress Party, Sharad Pawar and other senior Ministers also about the misdeeds and malpractices. On my briefings, I noticed that some of the Ministers were already aware about some aspects mentioned by me,” he said.

Singh said the Home Minister had been “unhappy” with him for his resistance in filing an abetment to suicide case in the death of parliamentarian Mohanbhai Sanjibhai Delkar against officials in Dadra and Nagar Haveli that would have earned him “political mileage”.

“On a collective appraisal of events that have transpired and what is being pointed out by me makes it clear that I have been made a scapegoat to divert attention from the actual wrongdoers,” he said, adding his transfer was “for extraneous and vindictive reasons”.

Denying the accusations in a statement, the Home Minister wrote, “Parambir Singh’s allegations on me are absolutely false and baseless. He has made these allegations as a pet of a conspiracy to save himself and to malign the image of Maha Vikas Aghadi and me.”

“I’m filing a defamation case against him,” he said, asking why Singh had been sitting on the allegations despite knowing of them as early as January.

Former Chief Minister Devendra Fadnavis of the BJP said, “We demand Home Minister’s resignation. If he doesn’t, then Chief Minister must remove him. Impartial probe must be conducted…Letter also states that Chief Minister was intimated about this earlier so why didn’t he act on it?”