“According to my personal sources, the Chinese are not happy with the current progress of CPEC projects as they have approached me to help remove the bottlenecks,” Chairman of the committee Saleem Mandviwala said. 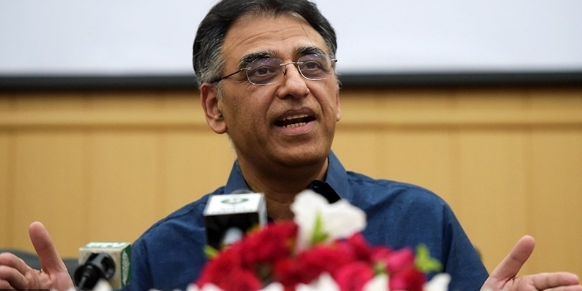 Islamabad: Pakistan’s Minister for Planning, Development, and Special Initiatives Asad Umar on Friday sought to dispel the impression of a slowing down in the pace of the China Pakistan Economic Corridor (CPEC) projects saying that the major works had been completed by Imran Khan government.

“Security threat is elevated,” he said in response to a question at a hurriedly called news conference, adding that no doubt development on CPEC was “looked upon with aversion by big global powers who wanted to sow dissension in the country”. The challenges are also there because of the uncertain Afghan situation. “So there are not only security challenges, but these are at an elevated level,” he said, Dawn news reported.

However, Umar said, the entire leadership led by the prime minister and also including the army chief and other security high-ups had taken effective steps that had also been shared with the Chinese leadership who had expressed confidence in the additional security arrangements.

On July 14, nine Chinese workers were killed in a blast in Dasu, in northern Pakistan’s Khyber-Pakhtunkhwa. The blast took place on a bus carrying Chinese and Pakistani workers to the site of a hydroelectric dam being built by China as part of the CPEC. Work on the project has been suspended since the blast, and Islamabad has been at great pains to reassure Beijing of the safety and security of its projects in Pakistan.

The Minister’s remarks come as the Senate Standing Committee on Planning, Development and Special Initiatives on Thursday directed the CPEC Authority to complete the under-implementation projects on fast-track mode by regaining the confidence of the Chinese companies.

“According to my personal sources, the Chinese are not happy with the current progress of CPEC projects as they have approached me to help remove the bottlenecks,” Chairman of the committee Saleem Mandviwala said.

The chair asked Special Assistant to Prime Minister on CPEC Affairs Khalid Mansoor to take the responsibility of early completion of under-construction projects and of removing all bottlenecks like taking approval of the under-consideration megaprojects, including up-gradation of ML-1 railway project and the hydropower projects, Pakistani media reported.

“My number one priority is to regain the Chinese confidence,” Khalid Mansoor said, adding that in this regard he had personally met with representatives of 40 out of 135 Chinese companies working in Pakistan.

“I will take responsibility for the implementation of the projects and I will go personally to all the concerned ministries and divisions to implement the CPEC projects,” he added. Mandviwala said the government departments were very slow and they needed to be pushed to expedite the implementation process.

Minister for Planning, Development and Special Initiatives Asad Umar, responding to the complaints of Senator Danish Kumar about ignoring Balochistan under CPEC, said in the first phase of CPEC, two-third projects were related to power which had minimum impact on the local area. He said a lot of development work was going on in the province particularly in Gwadar such as desalination plants, technical training institutes, Eastbay Expressway etc.

Apart from the projects under CPEC, a special historical package of Rs560 billion had also been announced for the development of least developed southern Balochistan districts under which IT parks, industrial zones, power plants, dams, and road projects would be developed.