“We have made it very clear that whatever or whoever moves any status quo or gives any order or anything, we respect the stand that different commissions may have, we will challenge that in the court,” he emphasised. 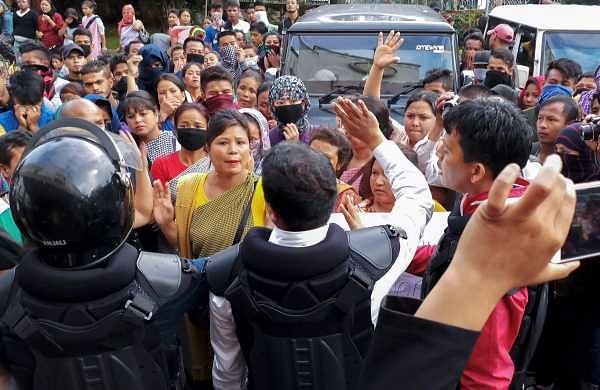 Shillong: Meghalaya Chief Minister Conrad Sangma on Monday asserted that the ownership of the land at the Sweeper’s Colony, which the government has decided to take over, was with it and that no stakeholder had till date come forward with relevant documents that the property was gifted to any entity.

“It is important for individuals, the leaders from the government of Punjab who mentioned that they will also be taking up the matter; they need to also understand that the ownership of the land is with the government in terms of the lease that has been signed with the Syiem of Hima Mylliem,” Sangma reacted to Punjab Deputy Chief Minister Sukhjinder Randhawa’s announcement to move the Minority Commission and the Centre for intervention for maintenance of status quo in this regard.

“We have made it very clear that whatever or whoever moves any status quo or gives any order or anything, we respect the stand that different commissions may have, we will challenge that in the court,” he emphasised.

“So the people who are government employees who have been working with municipal board and other departments who are staying in that area will be asked to shift to the official residential complexes of those departments,” he further iterated.

“One has to understand first that legal documents and the papers are with the government so therefore, whoever is staying there has to be in the terms of what the government decides,” Sangma asserted, adding that illegal settlers will be shifted or to some other places.
Reacting to the Harijan Panchayat Committee’s (HPC’s) claims that the land was gifted to them by then Syiem of Mylliem, the Chief Minister said, “the High Powered Committee had given the opportunity
time and again for different stakeholders or individuals or groups to come and submit any
kind of documentation that they have to claim or counterclaim the ownership or gift or whatever the land they had, sadly, nobody has come forward with any kind of information to the High Powered Committee”.
“One cannot stop anybody if they have concerns for their people it is very fair, if somebody, our people Khasi or Garos are going to be harassed in another state obviously as state government it is our responsibility and duty to intervene,” he said reacting to groups from Punjab having taken up the issue.

“So it is not something wrong that the other governments are doing but showing their concerns. I am not saying interfering, it is natural that they show their concerns but it should be clear to all these governments, individuals and political parties also that whatever the Meghalaya government will do will be legally sound and will follow legal procedures and all the procedures required for any kind of step or action to be taken will be done in a very legal manner,” Sangma iterated.
Stating that the government has done a “lot of homework” resolving this vexed issue, the Chief Minister said, “We will now break this into smaller problems and will resolve this one by one and obviously the last part which is most complicated, we have asked the urban affairs department to give us what are the options that they have.”

Meanwhile, the Chief Minister said the procedures of shifting the Shillong Municipal Board office, shifting the government employees who have been allocated spaces, all those aspects can start happening.
“We will see that the solution will start rolling and we are hopeful that we will soon find a complete solution to this problem,” Sangma expressed confidence.