Addl. Commissioner of Income Tax, Range – Imphal, Ng. Joseph Gangte, IRS, stressing the importance of paying taxes stated that the development of a country is determined by the number of taxpayers. 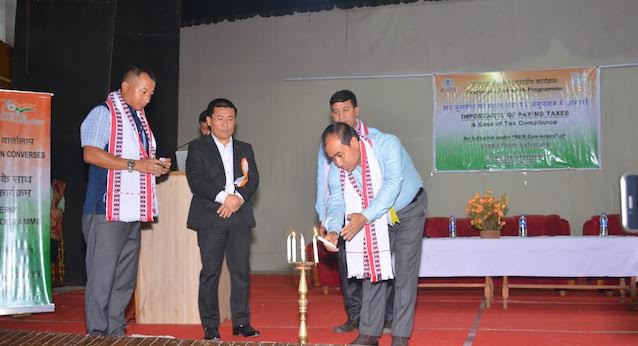 The outreach programme was held under the aegis of “Azadi Ka Amrit Mahotsav and North East Region Converses” on the topic – ‘Importance of Paying Taxes and Ease of Tax Compliance’.

Addl. Commissioner of Income Tax, Range – Imphal, Ng. Joseph Gangte, IRS, stressing the importance of paying taxes stated that the development of a country is determined by the number of taxpayers. It is through the taxes collected that the government is able to provide basic facilities for the citizen of the country.

He also said that the achievement in the collection of 100 drore income tax in the State during the last financial year is an indication that the State is able to contribute towards the cause of nation-building.

Joseph Gangte while informing the new provisions under Tax Deducted at Source (TDS) mentioned that income from the transfer of virtual digital assets or cryptocurrencies is taxable at 30 percent from April 2022. He urged the gathering to be ambassadors in contributing to the development of the country by regularly paying taxes.

Income Tax Officer, Ward-1, Imphal Laishram Ramcharan Singh, gave a PowerPoint presentation on – the ‘Importance of Paying Taxes and Ease of Tax Compliance’ for salaried as well as non-salaried taxpayers.

During the presentation on duties of taxpayers and DDOs, he stated that it is the duty of the taxpayer to extend full cooperation to the IT department and comply with tax laws and regulations by paying taxes timely and accurately.

Speaking on the occasion, Treasury Officer, Bishnupur,  L. Ratankumar Singh, highlighted the importance of paying income taxes and timely filing of returns. He opined that the outreach program will be immensely useful for creating awareness among the officials and DDOs of the district on the filing of income tax returns.

During the programme, the recipient of Dr. Ambedkar National Award 2021 for Art & Culture, Neha Yumkhaibam; septuagenarian Landuanlung Kamei, who single-handedly planted marigold flowers in more than 2 km stretch along the Old Cachar road in Bishnupur to Khoupum area and Cyclist and Social Activist Philem Rohan Singh, were among the 11 distinguished personalities felicitated for their contributions in various fields.

Government and PSU officials, entrepreneurs, and students participated in the program