Oppn alleges assault of MPs, slams govt for silencing it

Gandhi said the voice of 60 per cent of Indians was silenced as the Opposition was not allowed to speak, and called it the murder of democracy. 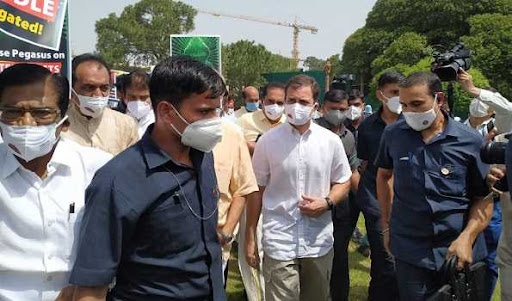 Gandhi said the voice of 60 per cent of Indians was silenced as the Opposition was not allowed to speak, and called it the murder of democracy.

“As far as 60 per cent of the country is concerned, there has been no Parliament session. The voice of 60 per cent of this country has been crushed, humiliated, and yesterday in the Rajya Sabha, physically beaten,” he said.

“This is nothing short of murder of democracy of this country,” Gandhi said.

Asked about Rajya Sabha Chairman M Venkaiah Naidu being upset over disruptions in the House, an angry Gandhi said it was the first time MPs were beaten up, and questioned what the Chairman was doing.

“For the first time in Rajya Sabha, MPs have been beaten up. Outsiders were dressed as marshals and MPs were pushed and shoved, and you ask if the Chairman is upset. It is Chairman’s responsibility to run the House, why didn’t he run the House. Why can’t we speak in House?” he said.

“The Prime Minister is selling this country. He is selling the soul of the country to two-three corporates. The government does not talk about farmers, or Insurance Bill or Pegasus,” he said.

Opposition MPs had earlier alleged they were assaulted by marshals, while the government had accused the Opposition of misbehaving with the security personnel.

The stormy Monsoon session came to an end on Wednesday, two days ahead of schedule. Rajya Sabha witnessed Opposition protests during the passing of the Insurance Bill, which the Opposition wanted to be discussed on the next day.

Marshals were called in Rajya Sabha as Opposition MPs protested.