One ULFA cadre surrenders in Nagaland

The surrender of the cadre will motivate other cadres of the region to return to the mainstream. T 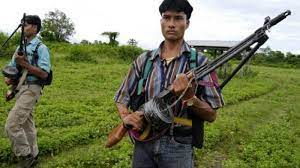 Kohima: One United Liberation Front of Asom (ULFA-Independent) cadre was surrendered to the security forces along the indo-Myanmar international border at Mon district of Nagaland.

According to a Defence release issued by Lt Col Sumit K Sharma, PRO (Def) in Kohima informed that in the concerted efforts of Tuensang Battalion of IGAR (North) under Spear Corps to convince insurgent cadres to rejoin the mainstream led to another major success, when a Border Domination Patrol obtained surrender of an active cadre of ULFA(I) on the Indo Myanmar Border in Mon District, while he was returning from Myanmar.

The surrender of the cadre will motivate other cadres of the region to return to the mainstream. The cadre has also revealed that in all probability, the third kidnapped ONGC personnel Ritul Saikia is with ULFA (I). He also mentioned that, he led a difficult life while in the ULFA and made an appeal to his comrades to shun violence, the release added.