He said the conflict has been intensifying after the National Physical Plan 2011-30 was implemented. 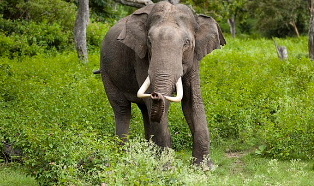 Colombo: In the wake of steadily rising human-elephant conflict, it is impossible to believe official figures that Sri Lanka is now home to 7,000 elephants, an expert said in remarks published on Friday.

The Island newspaper quoted Sajeewa Chamikara of the Movement for Land and Agricultural Reform (MOLNAR) as saying that between 2002 and 2022, there were 4,954 elephant and 1,602 human deaths due to the human-elephant conflict.

He said the conflict has been intensifying after the National Physical Plan 2011-30 was implemented.

“I conducted a study on the human-elephant conflict. I looked at all data on the deaths of elephants and humans since 2002. Between 2002 and 2006, there were 669 elephant and 300 human deaths in the man-versus-beast encounters,” he said.

Chamikara said in 2011 the National Physical plan was implemented. This was followed by a spike in elephant and human deaths.

“In 2011, we had an elephant census and it was estimated that there were 5,879 elephants in the country. After that census, 3,421 elephants have died. Now the Minister says that there are 7,000 elephants in Sri Lanka. This is impossible when you look at the numbers,” he said.

Chamikara said the human-elephant conflict has increased due to loss of habitat and not because of a spike in elephant population. The Minister of Environment is also trying to deceive people about the forest cover in Sri Lanka, he said.

“It is undeniable that the human-elephant conflict has increased. This is due to loss of habitat. Instead of addressing this issue, the government is cooking up numbers to convince people that the elephant population has increased while the forest cover remains the same,” he said.