The speaker then called an all party meeting to resolve the issue and adjourned the house for ten minutes till 1155 hours. 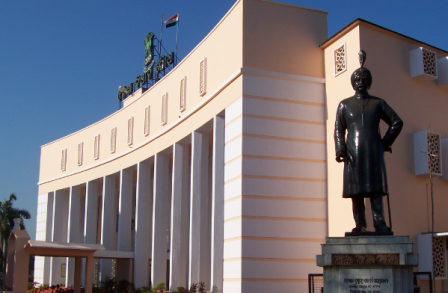 Bhubaneswar: The Odisha Assembly was adjourned four times on Tuesday till 1600 hours without transacting any business as Opposition Congress and BJP members stalled the proceedings over primary teachers dharna which entered the third day.

An agitated opposition trooped into the well of the house, raising slogans supporting the teachers’ stir right from the beginning when the Assembly assembled for the day at 1030 hours to take up the question hour.

As the house witnessed ruckus , Speaker B K Arukh first adjourned it at 1033 hours till 1130 hours. The house reassembled at 1130 hours after the adjournment but was again adjourned at 1133 hours till 1145 hours due to protest from the Opposition members.

The speaker then called an all party meeting to resolve the issue and adjourned the house for ten minutes till 1155 hours.

An all party meeting over the issue was also convened by the Speaker on Monday after the house was adjourned twice over the teachers stir.The house however, resumed normalcy on Monday when the Speaker in his ruling directed the government to pay attention to the teachers demands.

When the house met at 1155 hours after third adjournment, Congress legislature party leader Narashingha Mishra, party MLA Tara Prasad Bahinipati and Santosh Singh Saluja drew the attention of the Speaker about the ongoing agitation of the primary teachers and criticized the government for not responding to the demands of the teachers.

Responding to the Speaker’s directive Science and Technology Minister Ashok Panda in the absence of the Mass and Education Minister, said the government is well aware of the teachers problem.

Panda said the teachers’ demands are linked to some other departments also and the government is looking into all these aspects.

The Opposition however, continued their slogan shoutings despite the reply of the minister Congress MLA Tara Prasad Bahinipati said they will not allow the house to run as long as the demands of the teachers are not fulfilled.

The Speaker then was forced to adjourn the house till 1600 hours.

The question hour, zero hour and the adjournment debates were washed out due to the ruckus in the house. The question hour in the Odisha Assembly was adjourned for the second consecutive day on Tuesday over the issue

The trouble started on Tuesday as the house assembled for the day to take up the question hour. The Opposition Congress and BJP members stormed into the well of the house and shouted slogans.

Congress members rushed to the podium and party MLA Taraprasad Bahinipati stood on a chair and wanted to know the response of the government on Speaker B K Arukh’s ruling on the teachers strike which entered the third day on Tuesday.

Thousands of Primary teachers from across the state under the banner of United Primary Teachers Federation are resorting to an indefinite dharna at the Mahatma Gandhi Marg since Sunday on their three point charter of demands which included abolition of the contractual system, introduction of seventh pay scale, grade system and old pension system.

Like on Monday the house also on Tuesday witnessed ruckus with Opposition occupying the well and shouting slogans disrupting the question hour business.

The Speaker asked Minister Pradeep Kumar Amat to reply to the question to which the minister stood up and started replying which was not audible due to stiff protest by the Opposition members.

The Speaker appealed to the Opposition members to return to their seats and raise the issue during the zero hours but the agitated opposition did not pay any heed to the speaker’s request.

They wanted to know from the Speaker the response of the government on his ruling on the teachers strike and alleged that while the teachers are sitting on dharna the School and Mass Education Minister remained absent in the Assembly and was busy in Padampur assembly by election campaign.

Speaker Arukh finding no other way to run the business of the house smoothly first adjourned it till 1130 hours.The house was subsequently adjourned thrice till 1600 hours without transacting any official business during the day