Not a single voice came out from ruling party about Father Stan Swamy’s death: Sainath

the Founder Editor of the People’s Archive of Rural India (PARI) said it is meant to be a warning to all others, particularly to those who go against the policies of the government. 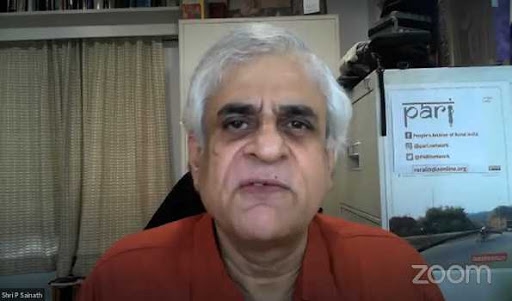 Hyderabad: Ramon Magsaysay Awardee P Sainath has said that not a single voice came out from the ruling party at the Centre and they showed callousness with regard to the death of the Jesuit priest and Tribal rights activist Father Stan Swamy who died on July 5 in the middle of his fight for bail on health grounds.

Delivering his lecture, on the 11th day of the month-long AIBEA National Webinars to commemorate the 52nd anniversary of Bank Nationalisation on the theme ‘Vibrant Banking for Vibrant India’ and focus ‘people’s money for people’s Welfare’, on Sunday evening, the Founder Editor of the People’s Archive of Rural India (PARI) said it is meant to be a warning to all others, particularly to those who go against the policies of the government.

Sainath spoke about the State we are in politically, legally, economically and culturally and to look at some of the options before us as middle-class citizens.

He said the print media wrote a few editorials about the death of Father Stan Swamy and they did not speak about the laws that incarcerate any one, who dissents the policies of the powers that be, without assigning any reason.

Even after death of Father Stan Swamy, there is no public outrage and hundreds are languishing in jails without any grave charges or chargesheets, Mr Sainath said.

For the past three decades, since neo-liberalism came to take over the country’s economy, the laws of the country started against farmers, peasants, common man, who dissent, he said.

Last week Supreme Court confirmed the fine imposed by the High Courts to the petitioners against the Central Vista project. If we compare with the vaccine crisis, in Mumbai, for the past 4- 5 days in the last fortnight, the vaccines are not available in Public Medical Services. Even though large-scale allotment is made to the private sector for vaccines, newspaper reports state that majority of them are not utilized and getting stagnated.

If it is a governmental organisation, it should be audited by CAG and hence it was audited by a private auditor. But, recently they stated that it is a public organisation. With Rs.3,076 Crore spent from PM Cares Fund, it will be enough to buy another 0.20 billion doses of vaccines. That means 90% vaccination requirements of our country could have been taken care of with these monies. But, that did not happen.

With this Rs.23,000 Crore, 18 AIIMS could be established throughout the country, he added.

In India, we have the middle classes and classification is complex. Many of the middle classes seem to believe that the decisions of Prime Minister are irreversible, decisive, irrevocable. But, the land acquisition, FRDI were withdrawn. The farmers have fought the farm laws and made them to a standstill. The surrender of the intellect by the middle class and embrace of market and neo-liberalism are some of the reasons for what India is today. The greatest inequalities touching the level of 1921-22 are prevailing in India today. The cruelty of the inequalities really exist. Markets have so much more legitimacy than even the elected governments, the PARI Founder Editor said.

In 2020, 140 dollar billionaires were there and India added 38 dollar billionaires in the first twelve months of the present pandemic. In the first 12 months, the wealth of the billionaires doubled in India to $ 596 billions. Adani’s wealth has grown up over 400% and Ambani’s wealth grew up by over 129% while the GDP shrank by over 24%. When tens of thousands lost their jobs and millions walked back home as they were starving, 23 health-sector billionaires added Rs. 5 billions every day. Ambani’s personal wealth is just under the Punjab’s Gross Domestic Product, he lamented.

Capitalism promises that if a man works hard, he will earn more. The common man or woman, in a rural household, can do a 100-day of MGNREGA and even if it is increased to 365 days, that individual would take 42 million years to reach the level of Ambani. A 10% wealth tax to the 140 dollar billionaires, we can achieve many things in this pandemic situation.

Mr Sainath said experts say that the Covid deaths would be as high as around 2.5 million and not as is being informed by the Government. Society is in a self-delusional state. The death numbers given by the government are fake. Farm suicides numbers are fake. Migrant workers numbers are fake, he alleged.

The system is built to trivialize the miseries of the marginal. In Uttar Pradesh, more than 1621

teachers have died due to Covid. But, they have compensated only 3 deaths because death on duty is interpreted as if a person falls to death in the polling booth or counting booth and not after fortnight or after a month. Their death certificates did not show that they died due to Corona. Even after Courts slammed the Uttar Pradesh government, there is no great efforts from the government.

The Census of India, 2011, showed that there were 400 million migrant workers. But, this was also not a correct figure because it did not take into account short-term migration etc. Because of farm crisis, they have migrated from villages. When migrant workers walked back home, the Solicitor General of India made a statement in the Supreme Court that there were no migrants walking back on road.

According to Government of India, 3.3 lakh farmers died from 2011 by committing suicides. From 2011, States in the country stated that there is zero farmer suicide. Poverty figures are also false. In 2019, the WHO report said that India had lost 4.5 lakh people to Tuberculosis. WHO also said that TB is a result of poverty and economically marginalized.

Mr Sainath said in the first 24 months of PM Fasal Bima Yojana, 18 insurance companies made a profit of Rs.15,795 Crore as per RTI data and it is Rs. 21 Crore a day. Of course obviously all of them are private insurers. But the real farmers facing problems do not get benefitted.

Question is, can it go on like this ? We all need to learn from the farmers. See the injustice shown to the farmers and still how they are fighting against the farm laws. More than 300-400 of them have died in the 7-month long agitation. When they are able to fight back the offensives of the government, it is an inspiration to all of us.

None of what has been in India today would have been achieved but for Nationalisation but the usurious money lending is coming back in rural areas. If banks are privatised, the corporate world only will benefit and not the common man, peasants, farmers etc.

He concluded by saying that we are not just in the midst of the present health pandemic but we are also in a pandemic of our own making of a neo-liberal policies that are cynical and if we cannot fight those policies, we cannot fight against privatisation of public sector banks.