According to the confederation, the matter will now be referred to the Organising Committee for FIFA Competitions. 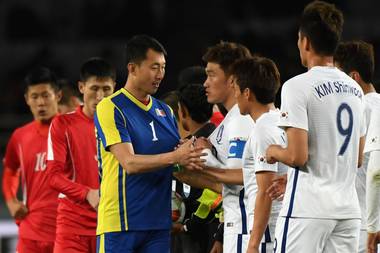 Seoul: The Asian Football Confederation (AFC) has confirmed North Korea’s withdrawal from the Asian qualifiers for the 2022 World Cup that are going to take place in South Korea this summer.

The DPR Korea Football Association (PRKFA) submitted an official document to the AFC last month, saying that it was not going to the qualifiers in South Korea in June because of COVID-19, among other concerns.

“The Asian Football Confederation (AFC) has today confirmed the withdrawal of the DPR Korea Football Association from the Asian Qualifiers for the FIFA World Cup Qatar 2022 and AFC Asian Cup China 2023,” the AFC said on Sunday.

According to the confederation, the matter will now be referred to the Organising Committee for FIFA Competitions.

“… further details on the standings in Group H, which include current leaders Turkmenistan, centralised venue hosts Korea Republic, Lebanon and Sri Lanka, will be announced in due course,” the AFC specified.

An official from the Korea Football Association (KFA) told Yonhap earlier this month that the AFC had asked North Korea to reconsider its decision.

In the first Group H match, the North and South played in October, 2019, in Pyongyang, with the game ending in a draw (0-0).

International Federation of Football Associations (FIFA) President Gianni Infantino said in February that the matches of the 2022 World Cup would be held with full stadiums since COVID-19 was expected to be defeated by then.