"There has been no damage or casualty," Gir Somnath Collector Ajay Prakash said. 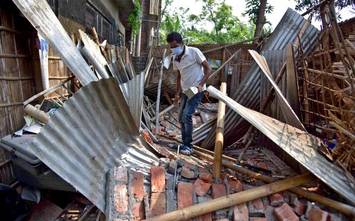 No casualty or damage to property was reported, they said.

The earthquake was recorded at 3.37 am with its epicentre one km East-South East of Una in the Gir Somnath district located in Saurashtra region, an official of the Gandhinagar-based Institute of Seismological Research said.

“There has been no damage or casualty,” Gir Somnath Collector Ajay Prakash said.

On July 16 last year, an earthquake of 4.8 magnitude was recorded near Rajkot in Gujarat.

Agartala: The CPI-M has accused the ruling BJP of forcefully bringing opposition supporters in the Chief Minister Biplab Kumar...
Politics

EU, US announce a goal of reaching 70 pc global vaccination rate within a year – EU Chief

No official communication from UK about issues with COVID-19 vaccination certificate: NHA