No country can take India for granted now: Rajnath Singh

Singh said as far as today's India is concerned, it's considered one of the strongest nations in the world. 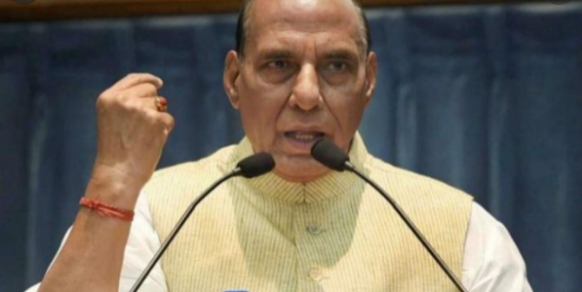 Lucknow: Defence Minister Rajnath Singh on Sunday said India has changed its image during the past seven years and now, no country can take it for granted.

Speaking at the Akhil Bhartiya Poorva Sainik Seva Parishad’s silver jubilee celebrations here, Singh said, “We have slowly succeeded in sending a message that is it, anyone, be it the strongest nation of the world, if anyone does something to India, then India won’t spare them. This trust has been built in the hearts of people by us.

“We have a neighbour. You know it very well, no need to take its name. It has made up its mind to practice arbitrariness with everyone. Many nations didn’t oppose it as they should have. Earlier our situation was the same. But the situation has changed after 2014,” he added.

He claimed that earlier, people used to say that only the US and Israel have the power to fight terrorism. “But the situation has changed now, today the world has started believing that India too has the power to fight against terrorism. We carried out a surgical strike and airstrike. Nobody had expected it,” he said.

Singh said as far as today’s India is concerned, it’s considered one of the strongest nations in the world. Nobody can deny the truth that the prestige of India has increased before the world.

“This time, our jawans were successful in sending across a message to our neighbour too. But I’m sad that some political parties attempt to question the valour of our jawans. They take the name of the leadership, but politicians don’t fight at borders, the jawans do,” he said.

The Minister said every Indian soldier, who participated in the 1971 war, created history. “We are proud of all our soldiers. With the decisive defeat over Pakistan, we told the world that India and Pakistan can’t be compared. We gave this message to the international community in 1971 itself.”

“Pakistan, which lost the 1971 war and the 1999 Kargil War, will now have to sever its ties with terrorism. As the Defence Minister, I tell you that they have made an announcement that they don’t shelter terrorism anymore,” he added.