Police said that huge quantities of gelatine sticks were brought from Badvel in a vehicle to carry out blasting at a limestone mine. 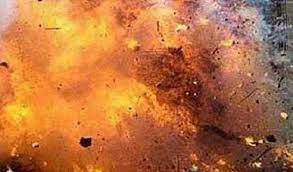 Kadapa: Nine mineworkers were killed and two others critically injured when gelatine sticks exploded at Mamillapalli village in Kalasapadu Mandal of YSR Kadapa district on Saturday.
Police said that huge quantities of gelatine sticks were brought from Badvel in a vehicle to carry out blasting at a limestone mine.
When the gelatine sticks were being unloaded from the vehicle, they exploded suddenly.
Nine mine workers who were in the vehicle were killed and two others were critically injured. The impact of the explosion was so intense that the limbs of the bodies were scattered around a few hundred meters away.
The vehicle turned into an iron mangle under the impact of the blast.
Pormamilla Circle Inspector Mohan Reddy and Kalasapadu Sub-Inspector M Mohan inspected the scene of the accident and making efforts to identify the bodies.
Meanwhile, Chief Minister Y S Jagan Mohan Reddy expressed shock at the death of mine workers in the explosion.
He enquired with the officials about the incident.
Reddy conveyed his sympathies to the bereaved families.
Former Chief Minister N Chandrababu Naidu also expressed deep shock and grief over the death of several innocent workers in the blast at the limestone mine in Mamillapalle village in Kadapa district.