Keeper Dominik Livakovic was the hero with saves to deny the Japanese chip of Daizen Maeda in a penalty shootout after 120 minutes of football between Croatia and Japan ended 1-1. 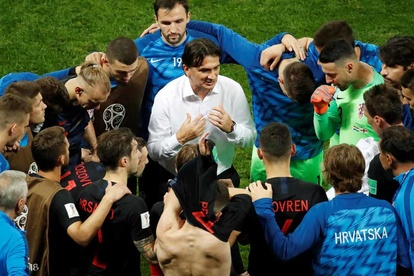 Doha:Zlatko Dalic praised his side’s resilience as Croatia held their nerve yet again to qualify for the quarterfinals of the World Cup.

Keeper Dominik Livakovic was the hero with saves to deny the Japanese chip of Daizen Maeda in a penalty shootout after 120 minutes of football between Croatia and Japan ended 1-1.

Croatia won two shootouts in the World Cup in Russia, while seven of their last eight games in the knockout stage of major tournaments have gone into extra time.

“This generation of players is resilient; they don’t give up: they reflect the spirit of the Croatian people. We have been through so much this is a source of pride and our way to give our people faith in a better tomorrow.”

“Never underestimate Croatia: we are small, but we never give up. We are diligent, hardworking and we fight for what we want: History keeps repeating itself,” commented Dalic in his post-game press conference in which he was full of praise for his goalkeeper.

“We practiced penalties in yesterday’s training and he saved a lot, so I had a lot of confidence that he would show that capacity today. All of our fears were resolved by Livakovic,” he added

Dalic admitted his side had struggled to adapt to Japan’s pace and aggression in the first half.

“It was difficult and I want to congratulate Japan for their approach, they were a very aggressive and difficult opponent. We struggled against their counterattack in the second half but were able to balance it out,” he said.

Dalic looked at Croatia’s recent World Cup history and advised Croatia have more to give:

“We have had a second and third-place finish (2018 and 2002) and this World Cup isn’t over. We have the right to hope for great results. Tomorrow, we will see who we play and we will keep on fighting,” concluded Dalic.

Livakovic was named man of the match for his penalty saves but was modest about his heroics.

“That’s what we do in Croatia, you could see that four years ago and I am continuing the tradition of my predecessors. I think it’s an analysis of the penalty takers you have in front of you,” he said, adding that he would rather win in 90 minutes because “penalties are risky.”