Around 240 Olympians, support staff and Sports Authorities of India(SAI) and sports federation officials were also invited to the event. 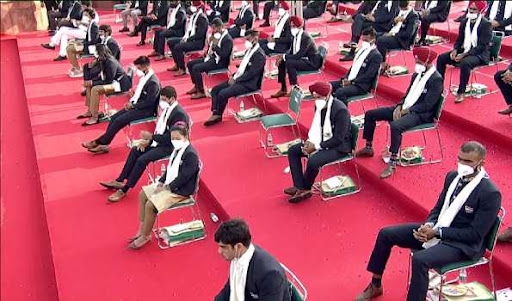 Around 240 Olympians, support staff and Sports Authorities of India(SAI) and sports federation officials were also invited to the event.

In Tokyo, India recorded its best-ever medal haul in the Olympics by bagging a total of seven medals – one Gold, two silver and four bronze.

Lauding the 2020 Olympic contingent, the Prime Minister made a special mention of Tokyo Olympic winners, saying they have not only won hearts but also inspired future generations. He also urged the nation to applaud their achievements.

This year, 500 NCC cadets from different schools also took part in this festival of National Fervour.

As the national flag was hoisted by the Prime Minister, two Mi 17 helicopters of the Indian Air Force showered flower petals. While Wing Commander Baldev Singh Bisht led the first helicopter, the second was commanded by Wing Commander Nikhil Mehrotra.

On his arrival, the Prime Minister was received by Defence Minister Rajnath Singh and Minister of State for Defence Ajay Bhatt and Defence Secretary Ajay Kumar.

Lieutenant Commander P Priyambada Sahoo assisted Mr Modi as he hosted the tricolour as the ceremony was synchronised with a 21-gun salute fired from gunners of the 2233 Field Battery (Ceremonial).

Before reaching the Red Fort, Mr Modi visited Rajghat and offered floral tributes to Father of the Nation Mahatma Gandhi.

After his address to the nation, the Prime Minister walked up to the reserved area to the greet the players and NCC Cadets.

The chairs for guests were placed at a distance of minimum of five feet from each other and security personnel deployed inside the enclosure were instructed to ensure guests maintained social distancing and wore masks during the event.

A senior Police officer said the Delhi Police has also made multi-layered arrangements in and around the Red Fort during the celebrations. Necessary coordination had been made with other agencies.

All agencies worked in close coordination with each other to cater to all kinds of threat inputs. SWAT teams and Parakram vans had been strategically stationed. The borders were sealed.