After a goalless but thrilling first half, Rohlupuia scored in the 54th minute for Mizoram, followed by Malsawmtluanga in the 80th. 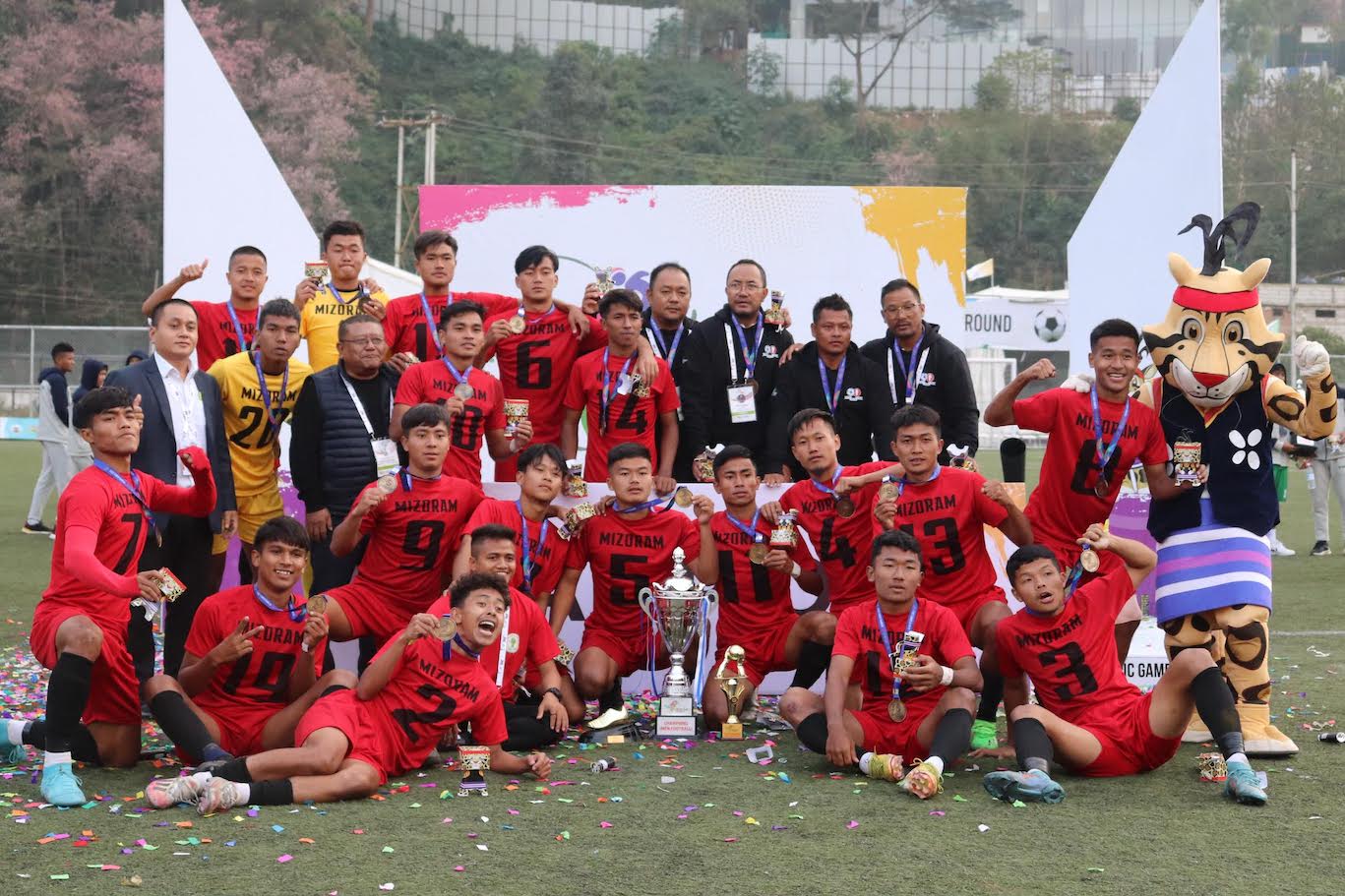 Shillong: Mizoram broke the hearts of Meghalaya’s thousands of fans but elated their own by winning the final  2-1 in the U-21 men’s football competition at the 2nd North East Olympic Games 2022 at the MFA Turf, Polo Ground, here Wednesday.

After a goalless but thrilling first half, Rohlupuia scored in the 54th minute for Mizoram, followed by Malsawmtluanga in the 80th. Oresterwell Langshiang pulled a goal back seven minutes later for the hosts but they could not find another.

The ground was packed to capacity, with some spectators having been there hours before the start to get tickets, which were free but in limited number, under the hot sun. The fans were subdued before the start, saving their energy to cheer when every player’s name was read out. Expecting large crowds, the Meghalaya Football Association set up giant screens at the nearby First Ground for fans who could not grab a seat at the ground to see the match streamed live.

Meghalaya appeared a little nervous at the start, with their defence looking vulnerable and passing a little unsure, which was understandable given the enormous pressure and hopes that were on them.

The first 10 minutes completely belonged to Mizoram but the home team started to come together after that.

The game burst to life in the second half, when Rohlupuia’s shot took a deflection off a defender and wrongfooted the goalkeeper, Rajat Paul Lyngdoh, before going into the net.

Meghalaya then had several chances of their own but Everbrightson Mylliempdah missed a tap and Figo Syndai was wide with one header and had another flick gathered by the opposition goalkeeper.

Immediately after the latter incident, Mizoram countered quickly up the left with a cross to the centre where Mawawmtluanga gathered it, swerved past one defender and scored.

With 10 minutes left to play, there was much for Meghalaya to do, but they had a bit of luck when the Mizoram keeper spilled a cross and the waiting Oresterwell Langshiang was able to  squeeze it in.

However, despite being cheered on by their fans, Meghalaya were unable to find the equaliser and the match went to Mizoram, whose fans packed one section of the ground.

Earlier, mighty Manipur bagged the U-17 women’s gold by beating Arunachal Pradesh 4-0 in the 9am kick-off. The bronze medals went to Manipur (U-21 men) and Mizoram (U-17 women), who won their respective third place matches yesterday.

Individual awards were also given. In the U-17 women’s category these were Keisham Melody Chanu of Manipur (Golden Glove), Loktongbam Shelia Devi of Manipur (Golden Boot), Angel Tamang of Arunachal Pradesh (Player of the Tournament). In the U-21 men’s category these were H Lalrinzuala of Mizoram (Golden Glove), Joseph Lalvenhima of Mizoram (Golden Boot), Figo Syndai of Meghalaya (Player of the Tournament).