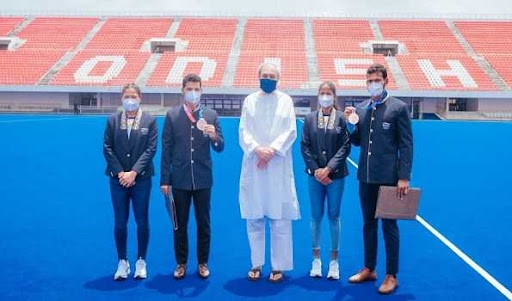 In recognition of their achievement and their potential to be the top teams in the world, Patnaik felicitated Captain Rani Rampal and the women’s team and also felicitated the inspirational Captain Manpreet Singh and the men’s team for bagging a bronze which was no less than gold for India.

Addressing the gathering, Chief Minister Naveen Patnaik, said, “You made us all so proud with your spirited fight at Tokyo. These are deeply emotional moments for India to witness the revival of Indian Hockey.”

Patnaik said the way the entire country was glued to the screens to watch the Hockey teams’ matches, it is quite evident there is something more to hockey than just sports. In the background of the Covid pandemic, it is remarkable that our teams have worked so hard in spite of all challenges and emerged victoriously, he remarked.

Patnaik said the teams have brought smiles on the faces of crores of Indians and “ We all should be thankful to our boys and girls,” he added.
The Chief Minister further said, “We, in Odisha, are elated that our partnership with Hockey India has led to this great achievement for the country.”

“We will continue our partnership with Hockey India and Odisha will support the Indian Hockey teams for 10 more years, he said, stating that this will herald a new era of Indian Hockey and bring back the glory to the nation,” he said.

Indian Olympic Association President Dr Narinder Dhruv Batra who has played a key role in the development of Olympic sports and sportspersons and in the revival of hockey in India and the prominence of Hockey around the globe was also felicitated by the Chief Minister.
Patnaik also felicitated Odia doctor, Col. (DR). Bibhu Kalyan Nayak who was appointed as the first Indian FIH Medical Officer for Tokyo Olympics and awarded him Rs 5 lakhs at the ceremony.

Belgium eliminated from WC after goalless draw with Croatia